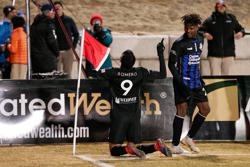 Coming off of their first loss of the season against the Sacramento Republic FC last weekend, the Switchbacks were looking to regain their winning record at Weidner Field. The best opportunity of the first half came from Saeed Robinson's strike from distance that rebounded back off the crossbar.

Chances in the second half were far and few between until the stage was set in the 82nd minute when Mike Seth came off for Cesar Romero, the Switchbacks latest signing. Just four minutes later, Jordan Schweitzer played a ball into Jordan Burt who dummied the pass right to Romero. Romero took a touch to set up his right-footed strike from nearly 30 yards out that curled inside the far post to win the game for the Switchbacks.

"We know he's not 90-minute fit. He just got here on Tuesday and started training with us on Wednesday," said Switchbacks Head Coach, Steve Trittschuh. "I was wanting to use him, we saw that spark when he came in and he did the job. He's a goal scorer and that's what it's all about."

The Switchbacks are now on the road for the next two matches to face the Phoenix Rising FC on March 30th and Orange County SC April 6th. The Switchbacks return to Weidner Field on Saturday, April 13th to face Reno 1868 FC on poster giveaway night with the Gazette, where draw-string bags will also be given away to the first 500 fans courtesy of Capelli Sport. Full 16oz beers will be available for $1 for the first 30 minutes after gates open at 5:00 PM. Tickets start at just $12 and are available HERE. For the price of a Switchbacks ticket and 2-5 beers, it is cheaper than buying 2-5 beers at a bar or restaurant.

Steve Trittschuh - On the substitution of Cesar Romero: "We know he's not 90-minute fit. He just got here on Tuesday and started training with us on Wednesday. I was wanting to use him, we saw that spark when he came in and he did the job. He's a goal scorer and that's what it's all about."
On where the Switchbacks are right now: "I like the group we have right now. They fight, they work together. They're a team that we put together that work together, and that's all we can ask. All in all, I like the way we're playing. We just have to sharpen a few things up and have competition at every position."

Cesar Romero - On overall thoughts on the match: "I'm very thankful with God because that's the debut I dreamed of. The most important thing is the three points for the team."

Jordan Schweitzer - On his overall thoughts on the match: "That's a team effort, from top to bottom. From the guys that started to the guys that came in. Obviously, Cesar comes in and gets the goal. It's a big-time finish on his debut and it's not a bad way to start. But credit to everyone that worked hard tonight. Mike was pressing extremely hard up top, holding the ball up for us at times. It was a team effort. Everyone played well, it was a really good combination goal. The way that we played last week, that was exactly the way we needed to come out and make a statement at home."