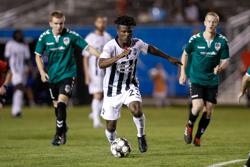 Guam will play Bhutan in the first round of Preliminary Joint Qualification in a home-and-home aggregate series to determine which country moves on to the second round of qualifying, guaranteeing them at least eight more games. The first leg is June 6th in Bhutan while the second leg is June 11th in Guam.

“Since I started playing with Guam in 2014, I’ve been to 32 countries. Just getting those opportunities is one in a million, once-in-a-lifetime opportunity, really,” stated Malcolm. 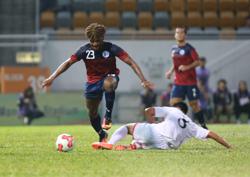 Malcolm, who qualifies to play through his paternal grandmother, has over 20 caps for the Guam National Team since 2014, scoring twice, both times during the EAFF E-1 Football Championship, an international competition in East Asia for member nations of the East Asian Football Federation (EAFF). His first goal came in a 2-1 victory over Chinese Taipei during the 2014 competition,  and his other came in 2016 during a 3-2 loss to Hong Kong.

The Switchbacks' next game is June 8th when the Tacoma Defiance come to town on Star Wars Cancer Awareness night. The players will be wearing R2-D2 themed warmup jerseys that will be auctioned off all week leading up to the game with all proceeds benefiting the Penrose-St. Francis Health Foundation. The first 1,000 fans in attendance will receive free lazer thundersticks courtesy of Penrose-St. Francis Health Services. You can bid HERE! Full 16oz beers will be available for $1 for the first 30 minutes after gates open at 5:00 PM. Tickets start at just $12 and are available HERE. For the price of a Switchbacks ticket and 2-5 beers, it is cheaper than buying 2-5 beers at a bar or restaurant.