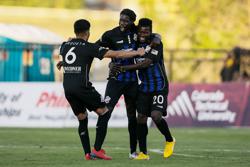 Coming off of the 1-0 win over Fresno FC last weekend, the Switchbacks' were looking to win their second consecutive game at Weidner Field on Star Wars Cancer Awareness Night. After a few early chances from both sides, the Switchbacks got on the board first when Jordan Burt blocked a clearance from Tacoma goalkeeper, Trey Muse, and Burt converted the loose ball for his third consecutive game with a goal in all competitions. That was also Burt's team-leading fifth goal of the year, with six goals total in all competitions. Saeed Robinson had a chance late in the first half but his effort came back off the crossbar and the Switchbacks' went into the half with the 1-0 lead.

In the 67th minute, Switchbacks head coach Steve Trittschuh made his first substitution of the night bringing in Logan Dorsey for Matt Hundley. Dorsey, a player for the U17 Colorado Rapids Developmental Academy team, would make the most out of his opportunity when he took the ball down off his chest and fired home his first professional goal from a Switchbacks' corner kick. The hosts would add another three minutes from full time as Mike Seth found a streaking Ish Jome who buried his 1-v-1 in the upper corner to cap off an emphatic 3-0 victory for the Switchbacks.

"There were stretches where we were really good and obviously places where we could improve like any game. But at the end of the day, when guys made mistakes, people were there to cover them. That's a sign of a good team and everyone working for each other," said man of the match and team captain, Jordan Burt. "To score three goals is even better. It's been a struggle for us to do that all year so hopefully this gets us going."

The Switchbacks' next game is June 15th when they travel to Texas to take on Rio Grande Valley FC. The Switchbacks' return to Weidner Field on June 22nd as the Real Monarchs SLC come to town on Summer Fireworks and T-shirt Giveaway Night. The first 500 fans in attendance will receive a free Switchbacks t-shirt courtesy of Colorado Technical University. Full 16oz beers will be available for $1 for the first 30 minutes after gates open at 6:00 PM. Tickets start at just $12 and are available HERE. For the price of a Switchbacks ticket and 2-5 beers, it is cheaper than buying 2-5 beers at a bar or restaurant.

Steve Trittschuh - On his overall thoughts on the game: "It was a good win. We've talked about having a good month of June so that's two wins now and we just have to keep moving forward."

On Jordan Burt's performance: "We talked about pressing the game and he got a goal from pressing. Other than that, he did well. I know physically he's struggling a little bit right now so that's why we took him out, to rest him a little bit. He was having a good game."

On the formation change to a 4-4-2 in recent games: "We were just trying different things. It's working and we're going to stick with it right now."

On Logan Dorsey's performance: "We have someone that can come in and add to the game and he did it. He scored a goal and good for him."

Jordan Burt - On the importance of tonight's 3-0 win: "It's huge. We've been saying it's a new month and to get six points here at home is awesome and it feels good."

On his overall thoughts on the game: "There were stretches where we were really good and obviously places where we could improve like any game. But at the end of the day, when guys made mistakes, people were there to cover them. That's a sign of a good team and everyone working for each other. To score three goals is even better. It's been a struggle for us to do that all year so hopefully this gets us going."

On what he saw on his goal: "The field is super thick right now and I saw the pass back was a little slow. I got a good read on it and the goalie took a big touch. It was just one of those ugly goals that I love to take. I'm glad the ball stayed in bounds when I stole it from him, but those are the type of goals that I love."

On playing forward for the first time in his professional career: "It's new to me, honestly. I don't know if I know exactly what I'm doing up there quite yet. But the last time I played up there, I had to been ten years old. But it's fun, I mean, just trying to score goals, and that's your only job, I'll take that and enjoy it while I'm up there."

Logan Dorsey - On his overall thoughts on the game: "It was good. We had a good performance. I was happy to come on and get a chance. It was a good team performance, everyone played really well and it was just good to get a goal tonight."

On what he saw on his first professional goal: "It was awesome! There was little deflection off of the center back. It came out and popped right out to me; I took a touch and just volleyed it with the inside of my foot and the keeper couldn't quite get there."

On what was going through his mind when he found out he was subbing in: "As soon as he calls my name, the adrenaline just kicks in through my whole body and I'm ready to go. I feel like I've never had more fresh legs in my life. I was sprinting everywhere, just trying to do everything I can to get ready to go in."