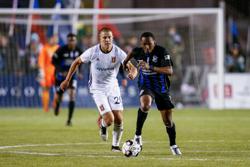 Coming off the loss on the road to Rio Grande Valley last weekend, the Switchbacks' were looking to win a third consecutive game at Weidner Field in June. Both sides went into the break deadlocked after a cagey first half. The Switchbacks' took the lead in the 55th minute as Jordan Schweitzer hit a low cross to the foot of Mike Seth who turned and fired his shot into the bottom corner for his second goal of the season. However, the Monarchs wouldn't go quietly as Kyle Coffee saw his shot take a big deflection and fly over the head of Andre Rawls in the 81st minute. The visitors completed their comeback five minutes later as Justin Portillo curled his free kick from the touchline to the upper corner of the far post.

"The team worked really hard. Both of the [Monarchs] goals; while the one was a really good shot, the other one was a real fluke," said Switchbacks forward, Austin Dewing. "It's disappointing to work that hard and come so close and lose."

The Switchbacks' next game is June 29th when they travel to Texas to take on Austin Bold FC. The Switchbacks' return to Weidner Field on July 4th as Orange County SC come to town for the biggest Fireworks show in Southern Colorado. The first 600 fans in attendance will receive a free Switchbacks blanket courtesy of Oakwood Homes. Full 16oz beers will be available for $1 for the first 30 minutes after gates open at 6:00 PM. Tickets start at just $12 and are available HERE. For the price of a Switchbacks ticket and 2-5 beers, it is cheaper than buying 2-5 beers at a bar or restaurant.

Steve Trittschuh - On his overall thoughts on the game: "We had the game in our hands and bad decision making leads to two goals. That's been our season."

Austin Dewing - On his thoughts on the game and his home debut: "I'm absolutely ecstatic to make my debut. It's frustrating because we were right there. The team worked really hard. Both of the [Monarchs] goals; while the one was a really good shot, the other one was a real fluke. It's disappointing to work that hard and come so close and lose. But we're definitely ready to get to work; not that we haven't been, but we can only look up from here and I'm just looking to add as much value as I can."

Mike Seth - On his overall thoughts on the game: "There was a couple of chances. I was fortunate enough to get one in the second half. We were up and of course it's frustrating because it's not the result we wanted."