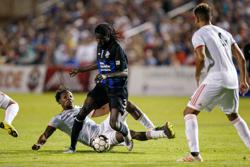 The Switchbacks were looking to get back on track in the teams first game under Interim Head Coach Wolde Harris. The Switchbacks got on the board in the first minute of the second half when Rony Argueta picked up a loose ball and fired a low and driven shot just inside the far post. However, Orange County turned the result around with a pair of counter-attack goals. The first came just three minutes after the Switchbacks took the lead as Michael Seaton got in behind the defense and held off a defender as he slotted the ball by Andre Rawls. The game-winner was a product of two substitutes for Orange County as Kevin Coleman assisted Giovanni Ramos Godoy's tap in.

Orange County's defender Walker Hume was shown a straight red card after a hard challenge to the face of a defenseless Matt Hundley to force the visitor's to play down a man for the final five minutes. The Switchbacks' nearly took advantage in the third minute of stoppage time as Abdul Rwatubyaye's header hit the underside of the crossbar before Logan Dorsey's rebound was punched off the line by Patrick McLain as he was falling backward into the goal to preserve the win for Orange County SC.

"We had our chances. We could've been up in the first half. They had quite a few corners but they never really created anything else to threaten us in a way where we really felt threatened as a team," said Switchbacks' Interim Head Coach, Wolde Harris. "The second half we came out much, much better. We adjusted a few things tactically and we were more cohesive defensively and offensively. The game came down to two moments for us defensively with lapses in concentration and they were able to capitalize on that. "

The Switchbacks are back at Weidner Field on July 13th to take on the Tulsa Roughnecks FC on Movie Night. The first 500 fans in attendance will receive a free Switchbacks poster courtesy of the Better Business Bureau. Full 16oz beers will be available for $1 for the first 30 minutes after gates open at 5:00 PM. Tickets start at just $12 and are available HERE. For the price of a Switchbacks ticket and 2-5 beers, it is cheaper than buying 2-5 beers at a bar or restaurant.

Wolde Harris - On his overall thoughts on the game: "We had our chances. We could've been up in the first half. They had quite a few corners but they never really created anything else to threaten us in a way where we really felt threatened as a team. The second half we came out much, much better. We adjusted a few things tactically and we were more cohesive defensively and offensively. The game came down to two moments for us defensively with lapses in concentration and they were able to capitalize on that. That being said, we still created three more chances. We have to take the positives with the chances we've created in the last two to three games. Now it's about getting those in the back of the net and making sure we don't have those lapses in concentration. But overall, the effort from the guys was superb and the energy was pretty positive. So we need to take the positives and move forward."

On playing with an attacking style: "We always want to attack. I was an attacker myself so I want to see attacking football. We want to have attacking football because it's entertaining. Not to say that we weren't playing attacking football. It's just that we want to put the players in positions that we're going to find more success going forward and creating more opportunities and going the other direction, limiting the other team. I think we had a challenge limiting them in the first half and they were finding those spots. Overall, I think the energy we came into the game with was the guys putting their heads down and working really hard to keep the clean sheet going into the half. It was just those moments in the second half that really cost us the game. But overall, I think it was a decent performance to build on. I think we deserved more out of the game."

Matt Hundley - On his overall thoughts on the game: "It's been a minute since I've been able to get 90 on the field. Under Steve's [Trittschuh] coaching, I was struggling to touch the field. The fact that Wolde [Harris] was able to put faith in me and put me on the field felt really good. Overall, I thought the team fought hard. It's unlucky not to come out with the result. We just have to be better defensively and finish our chances that we had. But overall, it's like a fresh start. We're looking at it in a positive way, just keep building and getting that chemistry under Wolde's coaching and we should be able to get the results."

Rony Argueta - On his overall thoughts on the game: "We had a lot of opportunities. Saeed had that one in the first half and towards the end we had a few that should have gone in. We'll continue to work. In my opinion, we need to be better on the ball in the attack and in possession. When you're in possession, in my point of view, you're in control. We have to be better technically and have more quality, so we'll continue to work."

On the Switchbacks recent struggles to find goals after creating so many opportunities: "Goals will come. That's another thing we've struggled with all season. We're creating opportunities and we're not being clinical with them. If those go in the back of the net, you're gonna win."