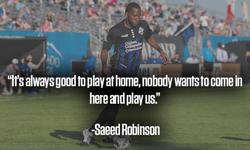 Last Saturday saw the Switchbacks vanquish the visiting Tulsa Roughnecks 1-0 behind a terrific header from Shane Malcolm after a pinpoint free kick cross from Ish Jome.  “I’ve not scored for a while and that had been on my mind,” said Malcolm on Tuesday morning. “It shouldn’t have affected me as much as it did, but it felt good to get the goal and we needed the win.”

Switchbacks captain Jordan Burt was named to the USL Championship Team of the Week after his performance in the win against the Tulsa Roughnecks on Saturday.

On Monday evening the Major League Soccer affiliate of the Switchbacks, the Colorado Rapids, hosted Arsenal of the Premier League at Dick’s Sporting Goods Park in Commerce City.  Eight Switchbacks players were available for selection against The Gunners, with six of them making an appearance. Jordan Schweitzer, Matt Hundley, Kwasi Donsu, César Romero, Ish Jome, and Kris Reaves all saw time on the pitch, while Ibrahim Yaro and Andre Rawls were unused substitutes. 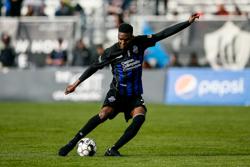 “It was a great experience,” said Kris Reeves.  “It was kind of surreal – watching those guys like [Alexandre] Lacazette, [Pierre-Emerick] Aubameyang, [Mesut] Özil on TV and then being on the field with them.  It was a once-in-a-lifetime experience.”

“The game last night was good experience at that level,” said Switchbacks Interim Head Coach Wolde Harris when asked on Tuesday morning in Colorado Springs about the friendly.  “I’m pretty sure our guys will value that experience forever. Some of our guys got some good minutes against players like Özil and Aubameyang and last night shows that our partnership with the Rapids gives a great opportunity for players at the USL level to move up.”

The Oklahoma City Energy FC edged the Switchbacks 1-0 at Taft Stadium in the Sooner State on May 25th behind a sensational strike from Omar Gordon after just 14 minutes.  Gordon has 4 goals for the Energy in the 2019 USL Championship season, trailing teammate and fellow Jamaican Deshorn Brown who has struck 9 times.  Rafael Garcia also has 4 goals for OKC, with the former Los Angeles Galaxy midfielder having scored last Saturday as the Energy held the El Paso Locomotive FC to a 1-1 draw at Taft Stadium.  The Energy will host Reno 1868 FC on Wednesday night in Oklahoma City before heading to Colorado Springs for Saturday’s clash with the Switchbacks. 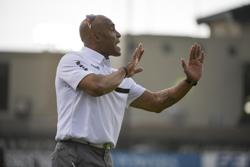 “OKC have good depth and a lot of speed and skill in their squad,” said Wolde Harris.  “Deshorn Brown, [Omar] Gordon, [Cordell] Cato who is another international with OKC, [Je-Vaughn] Watson sits in the middle…we have to be solid on defense and transition well going forward.”  Brown, Gordon, and Watson have all played for the Jamaican National Team, while Cato has been a full international for Trinidad and Tobago since 2014.

“We should be ready to go this weekend after we spend the week building off the performance against Tulsa,” said Kris Reeves.  “We can definitely learn and watch what we did well in that game. OKC are a good team and they’re coming to our field and we know it will be a good game.”

Following Saturday’s match the Switchbacks will head to The Biggest Little City in the World to face Reno 1868 FC at Greater Nevada Field on July 27th.

“This week it will be very important to focus on quality in possession,” said Harris.  “That quality is a factor in us having success late in games and finishing games like we did on Saturday.  We need to improve playing out of the back as we work together to get better each week. We had another good crowd last week and we’re looking forward to the same or better this weekend.  Hopefully Colorado Springs gets behind us and comes out again.”

The Switchbacks return to Weidner Field for a Wednesday night clash against the Portland Timbers 2 on August 7th, with Centura Orthopedics and Centura Health sponsoring a pregame cowbell giveaway and tickets are available HERE.  Just three days later the Switchbacks will host the Rio Grande Valley FC Toros at Weidner Field on Back to School Night, with a pre-game backpack giveaway courtesy of GE Johnson.

“There’s a real chance we can win,” said Saeed Robinson about Saturday’s match.  “We have more confidence than we’ve had in a long while and it’s always good to play at home – nobody wants to come in here and play us.”