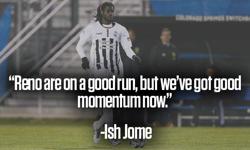 Fresh off back-to-back wins at Weidner Field, the Colorado Springs Switchbacks head to The Biggest Little City in the World this Saturday evening as they face Reno 1869 FC at Greater Nevada Field.  Just six points now separate the Switchbacks and the OKC Energy FC, who currently hold the 10th and final playoff place in the USL Championship Western Conference.

Reno 1868 FC won their fifth match in a row on Saturday as they defeated the Los Angeles Galaxy II at Dignity Health Sports Park behind a 70th minute winner from Seth Casiple.  Reno 1868 have a chance to move closer to 1st place in the Western Conference on Wednesday evening as Head Coach Ian Russell’s team face off against Orange County SC at Championship Soccer Stadium at OC Great Park on the site of the former Marine Corps Air Station El Toro in Irvine, California. 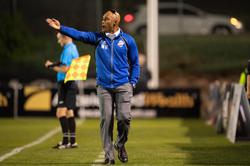 “They’ve won their last five games – we know they’re in good form,” said Switchbacks Interim Head Coach Wolde Harris when asked about Reno 1868.  “They play a 4-4-2, but they use a diamond in midfield.  I know they’ll be up to playing at home after being away for three games – it’s a good challenge for our guys to see if we can carry this form that we’ve shown on the road.  These two wins give us confidence and we’re doing the little things well but we need to be more consistent, especially going on the road. It’s a challenge to bring consistency and focus and the right mentality, especially in different environments.  I think our whole group is confident that we can achieve a good result in Reno.”

April 13th saw Reno 1868 defeat the Switchbacks 2-0 at Weidner Field in Colorado Springs behind goals from Seth Casiple and Brian Brown.  Jamaican forward Brown will not have a chance to add to his USL Championship goal tally on Saturday after moving to Albania in early July to play for FK Partizani Tirana in Albania’s capital city.

“I’ll re-watch the game from this season to see if they did anything differently than how they have recently because they’ve changed as the season has gone on,” said Harris before the Switchbacks held a film session in Colorado Springs.  “We’re looking forward to carrying our form on the road. [Corey] Hertzog and [Danny] Musovski are good players, and for me, [Seth] Casiple and [Will] Seymour really pull the strings for them. [Lindo] Mfeka at the 10 is very dangerous. Staying compact is the key to our game and especially making sure to not give Reno any space among the lines.” 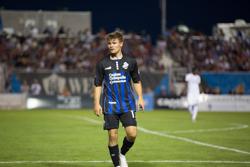 “I’ve never been to Reno before,” said Austin Dewing.  “I’m expecting a good challenge. We’re in a good place now and we just need to put a good week of practice together before this weekend. Tucker [Bone] and I know some players on Reno from college and we’re looking forward to a good game on Saturday.”  Dewing, a graduate of the United States Air Force Academy, played in the Western Athletic Conference for the Falcons against Danny Musovski (UNLV), Aidan Apodaca (California Baptist), and Sergio Rivas and Nathan Aune (both from Seattle University).

The forecasted highs for Saturday evening’s match in northwest Nevada are set to be in the mid 90’s with the Switchbacks looking to replicate their result from the 2018 season that saw the Switchbacks win 4-0 at Greater Nevada Field.

“Reno are on a good run, but we’ve got good momentum now,” said Ish Jome on Tuesday morning in Colorado Springs before being asked about his right-footed winner against the OKC Energy.  “I had a few shots with the right this year that I could have scored from!  I expect to score at least one more with my right foot this year,” said the Switchbacks’ left-back with a smile.   Jome was named to the USL Team of the Week after his whirlwind performance and winning goal against OKC.  “We put in a good performance last weekend and will look to take that to Reno.”

Following Saturday’s match, the Switchbacks will return to Colorado Springs before making their way west across the Rocky Mountains to face the Real Monarchs of Salt Lake City on Friday, August 2nd.  Wednesday, August 7th will see the Switchbacks return to Weidner Field as they host the Portland Timbers 2 with Centura Orthopedics and Centura Health sponsoring a cowbell giveaway.  Tickets are available for the T2 match HERE. Three days later, it’s Back to School Night at Weidner Field as the Switchbacks host the Rio Grande Valley FC Toros with GE Johnson sponsoring a backpack giveaway.  Tickets for the match against RGV can be purchased HERE.

“I watched Reno play OKC and they’re in good form,” said Switchbacks captain Jordan Burt.  “They move the ball well and we know it’ll be a challenge.  I’m looking forward to a good game.”