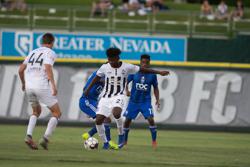 Reno 1868 FC got on the board first from Corey Hertzog who got in behind the defense and chipped Abraham Rodriguez for the first goal of the game. The hosts doubled their lead nine minutes later as Duke Lacroix took a cross down with his chest before firing the ball in at the near post. Reno kept the momentum in their favor in the second half with a brace from Lindo Mfeka. Mfeka scored a rebound and an uncontested shot that went in off the crossbar to extend Reno's lead and eventual win to 4-0 over the Switchbacks.

The Switchbacks are on the road again August 2nd to take on the Real Monarchs SLC at Zions Bank Stadium. The Switchbacks are back at Weidner Field on August 7th to take on the Portland Timbers 2 on Cowbell Giveaway Night. The first 500 fans in attendance will receive a free Switchbacks cowbell courtesy of Centura Orthopedics. Full 16oz beers will be available for $1 for the first 30 minutes after gates open at 6:00 PM. Tickets start at just $12 and are available HERE. For the price of a Switchbacks ticket and 2-5 beers, it is cheaper than buying 2-5 beers at a bar or restaurant.