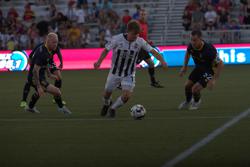 The best chances of the first half both fell to the foot of the Monarchs. Luis Palma fired a curved shot but Abraham Rodriguez equaled the effort with a save to push the ball over the crossbar. Luis Arriaga's shot also came back off the crossbar to keep the sides level going into the half. The hosts would find a late game-winner when Julian Vazquez's cross found the head of Damian German who made no mistake of the header from close range four minutes from full time for Vazquez's first professional goal.

The Switchbacks are back at Weidner Field on August 7th to take on the Portland Timbers 2 on Cowbell Giveaway Night. The first 500 fans in attendance will receive a free Switchbacks cowbell courtesy of Centura Orthopedics. Full 16oz beers will be available for $1 for the first 30 minutes after gates open at 6:00 PM. Tickets start at just $12 and are available HERE. For the price of a Switchbacks ticket and 2-5 beers, it is cheaper than buying 2-5 beers at a bar or restaurant.