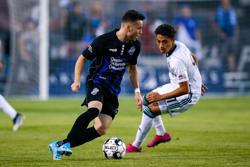 Colorado Springs, CO (August 7, 2019) – The Colorado Springs Switchbacks FC came from behind before ultimately settling for a 2-2 draw with Portland Timbers 2 Wednesday night at Weidner Field.

Both sides had a good chance in the first half with Portland taking advantage of theirs to grab the first-half lead. Saeed Robinson saw his curled shot just miss the far post early in the game before Cristian Ojeda smashed home a half-volley after a deflection in the box for the visitors.

Just three minutes into the second half, Portland goalkeeper, Aljaz Ivacic, handled a deliberate back pass that set up an indirect free kick for the Switchbacks just 6 yards from goal. On the ensuing free kick, Abdul Rwatubyaye laid the ball off for Ish Jome who slotted his shot through the only opening of Portland defenders on the goal line to tie up the game. The Switchbacks took the lead in the 67th minute as Saeed Robinson took a pass from Austin Dewing and collected the ball after taking a touch with speed past multiple Portland defenders before chipping the ball into the back of the net. However, Timbers 2 would find an equalizer just two minutes later from Foster Langsdorf's rebound header past a scrambling Abraham Rodriguez. The two sides settled for a point apiece with the same 2-2 scoreline from when the teams met in Portland on April 20th.

"We will take the positives from this game which was getting the result. There are things we will continue to work on but proud of the group for showing a bit of resilience and fight in the second half," said Switchbacks' midfielder Jordan Schweitzer. "Quick turnaround for the weekend so we will do everything we can to prepare."

The Switchbacks have a quick turnaround as the next game is at Weidner Field on August 10th as Rio Grande Valley FC come to town on Back To School Night. The first 1,00 fans in attendance will receive a free Switchbacks backpack courtesy of GE Johnson. Full 16oz beers will be available for $1 for the first 30 minutes after gates open at 5:00 PM. Tickets start at just $12 and are available HERE. For the price of a Switchbacks ticket and 2-5 beers, it is cheaper than buying 2-5 beers at a bar or restaurant.

Wolde Harris - On the teams overall performance tonight: "For us, we were leading after coming back from being a goal down in the first half. We came out much better in the second half than we did in the first, obviously. We pressured them and that translated into a mistake and we ended up tying the game. And then through some good combination play on top of the box, he got in and Saeed finished it beautifully. Again, for some reason, we just lacked concentration when it comes to critical moments in the game and allowed them to counter-attack us and give up a goal that I think is totally preventable."

On playing three games in nine days: "We have to take the positives from this game. Some people might be a little bit fatigued with it being the second game in four days but it doesn't get any easier with another home game in a couple of days. I think we have to manage our bodies and they should be prepared for RGV on the weekend."

Saeed Robinson - On scoring a goal giving him confidence moving forward: "It gave me some boost and some energy that I needed for the game and I started playing a little bit better. But I'm still disappointed that we tied because it felt like a loss because we're at home. I would've given up that goal to get a win."

On what he saw on his go-ahead goal: "Austin left it for me and pushed the ball around the guy. I thought the keeper had it but I didn't give up because coach said we should come out with more fight and I didn't give up on the play."

Jordan Schweitzer - On tonight's performance from the Switchbacks: "We will take the positives from this game which was getting the result. There are things we will continue to work on but proud of the group for showing a bit of resilience and fight in the second half. Quick turnaround for the weekend so we will do everything we can to prepare."