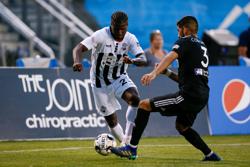 The Switchbacks came out of the gate fast as a quick throw-in lead to Tucker Bone setting up a left-footed strike from Shane Malcolm low past Nicolas Corti. The hosts doubled their lead in the 20th minute when Jordan Burt finished from close range after rebounds from shots by Saeed Robinson and Mike Seth. Rio Grande Valley FC cut the lead in half as Michael Salazar had some combination play with Andres Arcila on top of the box before finessing his shot around Abraham Rodriguez. The game was leveled before halftime when Kevin Rodriguez's shot was partially saved by Abraham Rodriguez and it was judged to fully cross the goal line before the ball was cleared by the Switchbacks' defense.

The hosts scored a third unanswered goal to take the lead from Andres Arcila's free-kick that Abraham Rodriguez got a hand to, but he ultimately couldn't keep the ball out of the goal. Late in the game, Jordan Burt drove the ball right down the middle of the field before unleashing a shot that was deflected before being tipped over the crossbar by Nicolas Corti. In the third minute of second-half stoppage time, the Switchbacks would find their equalizer in dramatic fashion as Abdul Rwatubyaye rose above everyone to head a corner kick into the top corner of the net to rescue a point for the Switchbacks.

"I thought we came out flying. I thought we executed the game plan according to what we were focusing on. We played our game and then there was an unfortunate turn of events with a couple lucky bounces and a guy gets through. He's a player we highlighted to take care of and try to keep off the scoreboard. Good players find a way to score goals and that's what he did. It got them back into the flow of the game," said Man of the Match, Shane Malcolm. "Overall, it was back and fourth and I'm happy we got a point at the end of the day."

The Switchbacks are on the road for their next two games when they take on Sacramento Republic FC on August 17th and Fresno FC on August 24th. The Switchbacks return to Weidner Field on August 31st to face the Phoenix Rising FC on Free Underwear Night. The first 1,000 fans in attendance will receive a free pair of Switchbacks underwear courtesy of Sheath. Full 16oz beers will be available for $1 for the first 30 minutes after gates open at 5:00 PM. Tickets start at just $12 and are available HERE. For the price of a Switchbacks ticket and 2-5 beers, it is cheaper than buying 2-5 beers at a bar or restaurant.

Wolde Harris - On what the main takeaway is from a wild 3-3 draw: "For me, after going up two goals, we stopped playing. We stopped doing the things that got us the two goals. We gave them space and time to play. And teams with quality like RGV and quality players up top, they're going to threaten you and you have to be able to respond. For me, that's a psychological thing and we have to correct that going forward. We can't afford to let other teams back in the game. We need to keep our foot on the gas and keep moving forward and try to get even more goals to put the other teams under pressure. That being said, we showed some character in the second half to come out and put pressure on them and find our footing again. We left it a little late, but we had chances in between."

On why the Switchbacks gave up an early two-goal lead: "I want us to keep doing the fundamentals really well. We were passing really well, our movement off the ball was well. We were breaking them down because we had timing in our movement and we had good angles of support. We basically played through them for the first 25 to 30 minutes because we had quality on the ball and quality movement off the ball. Everybody was on the same page offensively and defensively. After we got the second goal, something changed in our psyche that we dropped back and gave them time and space to play. That's something that we can't afford to do against teams like the one we're going to play this weekend."

Abdul Rwatubyaye - On what he thought of the team's performance tonight: "My thought was that we had to win this game. We grabbed the point which is very important because we were a goal behind. We had some mistakes in the back so we need to change that in practice. I think we're getting better, we're scoring more goals."

On what he saw on his late equalizer: "We had to do what we could to equalize the game. We wanted to get at least one point late in the game. I'm so proud for my teammates, the coach, and everyone. We're getting it together so I'm very happy."

Shane Malcolm - On his overall thoughts on the game: "I thought we came out flying. I thought we executed the game plan according to what we were focusing on. We played our game and then there was an unfortunate turn of events with a couple lucky bounces and a guy gets through. He's a player we highlighted to take care of and try to keep off the scoreboard. Good players find a way to score goals and that's what he did. It got them back into the flow of the game. Overall, it was back and fourth and I'm happy we got a point at the end of the day."

On his individual performance to be named Man of the Match: "We started off hot. I was playing in an attacking center midfielder role. I really enjoyed playing in there. But then I got on the ball a lot more when I got on the flank because we were targeting me to get balls in the box. Honestly, I think I could do better at the end of the day. I want to do better but I'm satisfied right now and we just keep moving for the next one."