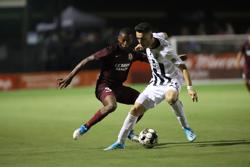 The Switchbacks had an early opportunity as a back-heel from Tucker Bone set up Saeed Robinson but Robinson's shot was just wide of the near post. Sacramento would take the lead when Jose Villarreal got in behind the defense before slotting his shot into the back of the net. After the break, Sacramento newcomer, Thomas Enevoldsen scored a quick brace to extend the host's lead to three in the 60th minute. In the final half-hour, Cesar Romero fired off a shot that was tipped over the bar by Bobby Shuttleworth but it was Cameron Iwasa that found the back of the net with an emphatic half-volley to finish off the 4-0 win for Sacramento.

The Switchbacks are on the road again on August 24th against Fresno FC at Chukchansi Park. The Switchbacks return to Weidner Field on August 31st to face the Phoenix Rising FC on Free Underwear Night. The first 1,000 fans in attendance will receive a free pair of Switchbacks underwear courtesy of Sheath. Full 16oz beers will be available for $1 for the first 30 minutes after gates open at 5:00 PM. Tickets start at just $12 and are available HERE. For the price of a Switchbacks ticket and 2-5 beers, it is cheaper than buying 2-5 beers at a bar or restaurant.