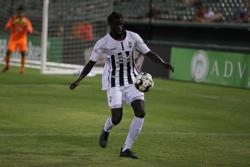 The first half was cagey which only saw a half-chance for each side as Jordan Burt fired a shot from distance over the crossbar while Abraham Rodriguez was forced into making a comfortable save. Rony Argueta, playing against his former team, found Saeed Robinson who dribbled to the top of the box before firing a shot off the post and into the back of the net to give the Switchbacks the lead in the 63rd minute. But Fresno would equalize just five minutes later through Hiroki Kurimoto's volley that Rodriguez could only get a piece of. The hosts wouldn't relinquish the lead after they scored on a corner that Ramon Del Campo put away from close range in the final minute of the game.

The Switchbacks return to Weidner Field on August 31st to face the Phoenix Rising FC on Free Underwear Night. The first 1,000 fans in attendance will receive a free pair of Switchbacks underwear courtesy of Sheath. Full 16oz beers will be available for $1 for the first 30 minutes after gates open at 5:00 PM. Tickets start at just $12 and are available HERE. For the price of a Switchbacks ticket and 2-5 beers, it is cheaper than buying 2-5 beers at a bar or restaurant.