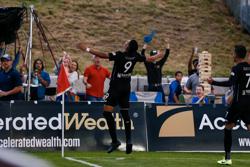 The Switchbacks had the best chance of the opening 35 minutes when Rony Argueta hit a shot from distance that forced Diego Restrepo into a high save. The hosts broke the deadlock 4 minutes from halftime when Fernando Gonzalez Delfin played a low cross into Cesar Romero who smashed his shot over the head of Restrepo and into the back of the net. After a short lightning delay, the Switchbacks earned a penalty kick in the 65th minute from an Austin handball but Jordan Burt's attempt was saved by a diving Restrepo. In the 70th minute, Austin leveled the score when Gustavo Rissi rose up to head home a corner to force the two sides to split the points in a hard-fought draw.

"We want to take the most wins possible to win the most points possible so we can end well," said Fernando Gonzalez Delfin after his first appearance at Weidner Field. "We're looking forward to the next matches so we can get some wins."

The Switchbacks are on the road for their next two games when they take on New Mexico United on September 14th and El Paso Locomotive FC on September 21st. The Switchbacks return to Weidner Field on September 28th to face the Las Vegas Lights FC on Bobblehead Giveaway Night. The first 500 fans in attendance will receive a free Switchbacks bobblehead courtesy of FOX21 News. Full 16oz beers will be available for $1 for the first 30 minutes after gates open at 5:00 PM. Tickets start at just $12 and are available HERE. For the price of a Switchbacks ticket and 2-5 beers, it is cheaper than buying 2-5 beers at a bar or restaurant.

Wolde Harris - On what he saw in the game tonight: "We did well in the first half, in terms of our organization. Starting defensively, I thought we were compact and we were putting pressure on the other team to turn them over in key areas and we're able to create opportunities. I think we probably could've put away one or two more opportunities in the first half. After the rain delay, we created the penalty and that's where the game could've ended. To give up another set-piece goal, it's in some ways frustrating. That being said, the team didn't quit, we kept pushing forward. Our style of play didn't change. And the guys kept working so I'm proud of them for that. But obviously we wanted to win tonight, I thought we deserved it. But sometimes that's football, it doesn't go your way."

On starting Delfin & Romero up top together: "We've seen them playing together in training. The communication aspect is there as well, they both speak Spanish. They both have the right skill set to play the position. I think with 2 [forwards] now, it posses more of a threat for the opposing defense. We're able to shift the defense out of position and hold the ball up so other people can join. It paid dividends; one found the other and they scored. We just have to look to build on that going forward."

Fernando Gonzalez Delfin - On the team's performance tonight: "I think the team played well. The result is not the one that we want but I think that we are improving and we have to take it into the next match."

On the Switchbacks' mindset going into the rest of the season: "We want to take the most wins possible to win the most points possible so we can end well. We're looking forward to the next matches so we can get some wins."

On if the delay hurt the Switchbacks' momentum: "The delay is for both teams. It can be an excuse for us but we have to get more concentrated. We have to get more focused in the games so we can't let those things happen."

Jordan Burt - On what the feeling is after tonight's game: "Disappointed. We deserved to win. I should've made the pk. We're just disappointed."

On his biggest takeaway from tonight's game: "We can play with anyone in the league, that's for sure. It just takes all of us playing well."

On what he takes from tonight going into the end of the season: "It's going to take everyone. We can't make any more mistakes. Just keep moving forward, we're not going to stop."