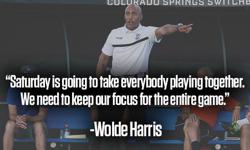 Romero started the match against Austin as part of a two-pronged Switchbacks attack alongside Fernando González Delfin, and it was Delfin who combined beautifully with Romero as the Switchbacks took a first-half lead.  “It was great to help us score and it was important to me, but to me I would like to get a win,” said Delfin on Tuesday morning in Colorado Springs. “This weekend we want to get the win and improve.”

“We need to work together as a team on offense and defense against New Mexico,” said Switchbacks Interim Head Coach Wolde Harris.  “We made changes last weekend to keep the quality of our game up, and they helped. But lapses in concentration came back and bit us.  We had chances to put the game away but again just a couple lapses in concentration really hurt us.”

“Saturday is going to take everybody playing together,” said Harris.  “We need to keep our focus for the entire game and that will be a challenge in a good environment.  It will be a great atmosphere and we have to make sure we transition quickly, especially on defense.  New Mexico do a really good job of getting in behind teams so we have to make sure we’re organized. Santi Moar, [Josh] Suggs, and [Manny] Padilla are all players that we have to watch, and of course we have to be very mindful of [Devon] Sandoval and Kevaughn Frater too.  Those two guys can be very dangerous when New Mexico get the ball out wide so that’s another thing that we need to watch closely.” 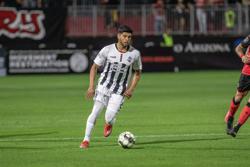 “I think if we press and improve on what we did last weekend we’ll do well,” said Rony Argueta.  “Anyone is good with a lot of time and space so we need to limit that for New Mexico. If we can press high and do some of the things we’ve been working on then we can put them under some pressure.  It’s going to be a fun game against a good team and we’ll work this week to be at our best.”

“At this moment it’s difficult for us to make the playoffs, so we’re playing for pride right now,” said Switchbacks center back Jamal Jack.  “I was injured last time for the game against New Mexico and I hope I can be out there on Saturday. We’re just trying to achieve points to get as high as we can in the table – that’s our focus right now.  We’ll need to play well on Saturday.”