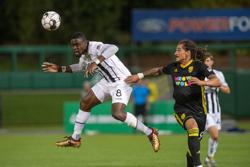 New Mexico United got on the board first when the ball fell to Devon Sandoval on the top of the box as he struck a half-volley off the far post and into the back of the net in just the 8th minute. The Switchbacks had two golden opportunities in quick succession to level the score when Saeed Robinson's shot came back off the far post and Fernando Gonzalez Delfin hit his rebound off the opposite post. Sandoval bagged his second goal just two minutes after halftime by finding himself in a 1-v-1 with Abraham Rodriguez before sneaking his shot underneath the keeper. Sandoval completed his hat trick with a glancing header that found its way inside the back post. The Switchbacks found a second wind that started with a corner kick sent in from Ish Jome that Jordan Burt rose up to head home his seventh goal of the season. Colorado Springs' were unable to convert a couple of late chances to fall on the road 3-1 to New Mexico United.

The Switchbacks are on the road again when they take on El Paso Locomotive FC on September 21st. The Switchbacks return to Weidner Field on September 28th to face the Las Vegas Lights FC on Bobblehead Giveaway Night. The first 500 fans in attendance will receive a free Switchbacks bobblehead courtesy of FOX21 News. Full 16oz beers will be available for $1 for the first 30 minutes after gates open at 5:00 PM. Tickets start at just $12 and are available HERE. For the price of a Switchbacks ticket and 2-5 beers, it is cheaper than buying 2-5 beers at a bar or restaurant.