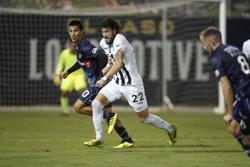 El Paso, Texas (September 21, 2019) – The Colorado Springs Switchbacks FC lost 2-0 to the El Paso Locomotive FC from a goal in each half on Saturday night at Southwest University Park.

Jordan Burt nearly scored in a second consecutive game when he found a yard of space to direct his header on target but Logan Ketterer kept the ball off the line with an outstretched hand. El Paso took the lead in the 22nd minute when Bryam Rebellon controlled a cross before smashing his shot over the onrushing Abraham Rodriguez. Matt Hundley had a solo effort at the beginning of the second half to set up a shot from distance but the ball dropped just too late as it clipped the top of the crossbar on the way over. The hosts doubled their lead in the final minute of the game from a counter-attack that set up an Omar Salgado cross to Alexy Bosetti that ended the game and officially ended the Switchbacks' hopes of making the playoffs in 2019.

The Switchbacks return to Weidner Field on September 28th to face the Las Vegas Lights FC on Bobblehead Giveaway Night. The first 500 fans in attendance will receive a free Switchbacks bobblehead courtesy of FOX21 News. Full 16oz beers will be available for $1 for the first 30 minutes after gates open at 5:00 PM. Tickets start at just $12 and are available HERE. For the price of a Switchbacks ticket and 2-5 beers, it is cheaper than buying 2-5 beers at a bar or restaurant.