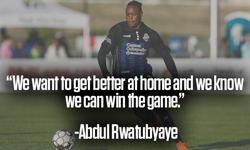 Tickets for Saturday’s contest at Weidner Field are available HERE, as the Lights FC hunt a place in the 2019 USL Championship playoffs.  At the time of writing, the Lights FC stood in 14th place in the USL’s Western Conference – just four points out of a playoff spot. 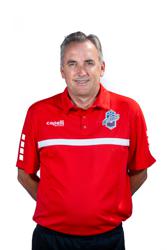 Switchbacks Assistant Coach Diego Zaltron and General Manager Brian Crookham took charge of Tuesday morning’s practice in Colorado Springs alongside Goalkeeping Coach Trey Harrington, as Interim Head Coach Wolde Harris missed the session at the Pride Soccer complex.  “Wolde is tending to a family matter but he should be back later in the week,” said Crookham. “We are in constant contact with Wolde – he’s got a good handle on what’s going on despite not physically being here. We’re looking at these first few days of this week and evaluating some minor health issues and making sure we have a game plan against a team that will come and be desperate for a win.  We need to step up and take advantage of our home field and score some much-needed goals. Las Vegas have multiple weapons that can hurt us, so it’ll take a collective effort to stop them. This weekend will be a lot about us and how we perform.”

“The next two days at practice we will focus on our defensive shape and how we press collectively,” said Diego Zaltron.  “The intensity in our game is there, but we need to hammer how we’re going to press and the key roles of each player. It will be intense this week – individual and group defending for the first few days, and Thursday and Friday will be more on our attack and being organized when we attack.”

On Monday afternoon, the Switchbacks announced the hiring of Alan Koch as their next Head Coach, with further information available about Koch HERE.

Irvin Parra scored a brace on May 11th as the Lights defeated the Switchbacks 3-0 at Cashman Field in Sin City, and Parra leads Las Vegas in goals with eleven and in assists with six.  Cameroonian striker Tabort Etaka Preston is second on Vegas’ scoring charts with six goals, while former University of San Diego Toreros standout Thomas Olsen is the Lights’ undisputed number one goalkeeper.

Hall of Famer and former United States men’s national team striker Eric Wynalda will lead the Lights into Colorado Springs to face a Switchbacks team that will be without their team captain, Jordan Burt due to yellow card accumulation.  Burt received his fifth yellow card of the 2019 USL Championship season in the 51st minute of Saturday’s match in far west Texas as the Switchbacks fell 2-0 to the El Paso Locomotive at Southwest University Park. 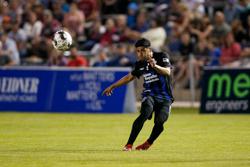 “At the end of the day, we’re players, so we focus on our jobs and on being the best players that we can be,” said Rony Argueta.  “Las Vegas are a good team – they have a lot of players who are good with the ball so we have to match that and be better with our possession.  We need to work on keeping the ball and making sure we’re smart when we’re going forward.”

The Switchbacks will play their final match in 2019 at Weidner Field on October 5th as they host the Los Angeles Galaxy II on Fan Appreciation Night, with fireworks to follow the match.  The first 500 fans will receive the fourth and final part of the Switchbacks’ poster giveaway series and the first 1,000 fans will receive a Switchbacks Drink Koozie courtesy of the Creative Consortium as the gates open at Weidner Field, with tickets on sale HERE.

“We want to keep our attitude high,” said Rwandan center back Abdul Rwatubyaye.  “We don’t want to end the season at the bottom of the league. We want to get better at home and we know we can win the game.”