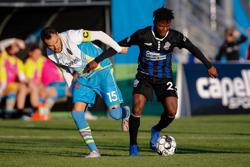 Colorado Springs, CO (September 28, 2019) – The Colorado Springs Switchbacks FC fell to the Las Vegas Lights FC 3-1 in a wild second half in front of 4,279 fans at Weidner Field Saturday night.

Coming off back-to-back away games, the Switchbacks were looking turn results around at home. After a cagey first half, the second half when the first chance fell to the foot of Fernando Gonzalez Delfin who directed his shot on target but the ball was headed off the line by Javan Torre. Las Vegas got on the board first as Preston Etaka laid a ball off for Irvin Parra who tucked his shot inside the far post with a powerful strike. Cesar Romero had the best chance of finding an equalizer as he got behind the defense but his first shot was saved by Adam Hobbs and the rebound was put just wide. Las Vegas extended their lead to three in quick succession after Etaka got behind the defense and Parra pounced on a quick turnover to score his second of the night. Abdul Rwatubyaye pulled one back for the Switchbacks in the second minute of stoppage time with a powerful header from Ish Jome's cross.

"It was a really tough game. It was a little bit of a microcosm of the season," said Man of the Match, Ish Jome. "We played well in the first half and we had a few chances. I think we had better chances on goal than they did but we didn't capitalize on ours and the mistakes in the back cost us the game."

The Switchbacks are back for the final game in 2019 at Weidner Field on October 5th to face LA Galaxy II on Fan Appreciation Night. The first 1,000 fans in attendance will receive a free Switchbacks Drink Koozie courtesy of Creative Consortium as well as the fourth and final poster in the 2019 series. Full 16oz beers will be available for $1 for the first 30 minutes after gates open at 5:00 PM. Tickets start at just $12 and are available HERE. For the price of a Switchbacks ticket and 2-5 beers, it is cheaper than buying 2-5 beers at a bar or restaurant.

Wolde Harris - On what he saw in tonight's game: "I think we got our chances tonight early and didn't take them, and they got their chances late and put them in the net. That's the story of football. You have to take your chances when you get them."

On what needs to change ahead of next weeks home finale: "A lot more energy, to start. We need more positive energy going forward. I think we were a little slow with the ball tonight, moving the ball between the lines. And we need to be better at that. To put people out of the game and get the ball wide like we did in the first half, we didn't do that in the second half."

Ish Jome - On the team's performance tonight: "It was a really tough game. It was a little bit of a microcosm of the season. We played well in the first half and we had a few chances. I think we had better chances on goal than they did but we didn't capitalize on ours and the mistakes in the back cost us the game."

On the Switchbacks' moving forward into the final few games: "We have to work as hard as possible in training again. Whenever you get knocked down, you have to get back up. We have to finish strong hopefully with three wins."

Shane Malcolm - On playing the last few games of the season already being eliminated from playoff contention: "For us, as players at this level, this is our livelihood. We might not have anything to play for, as in trophies, each and every one of us are playing for a job next year. Personally, if that's not enough motivation for you to come out here and give it your best, then maybe this isn't for you."

On the importance of next weekend's last home game of the season: "For me personally, this is my club. I love the Switchbacks, I love the fans here, they're like my family. So for me personally, next weekend, the last home game of the season, we have to get a result. We have to win. I want to do that for the fans. I want to do that for the club. I want to give back as much of what the fans have given to me. Something to smile about going into next year. It's been a lackluster season and we need to send them off with a win."