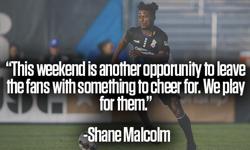 It’s Fan Appreciation Night this Saturday evening at Weidner Field as the Colorado Springs Switchbacks FC host the Los Angeles Galaxy II.  A fireworks display will follow the final whistle, while the first 500 fans through the gates will receive the fourth and final part of the Switchbacks’ poster giveaway series, with tickets available for Saturday’s match HERE.  Creative Consortium will also be sponsoring a giveaway of Switchbacks drink koozies for the first 1,000 fans.

The Galaxy II face a short turnaround before Saturday’s match in Colorado Springs, as Head Coach Junior Gonzalez’s team will play against Sacramento Republic at Papa Murphy’s Park in California’s capitol city late Wednesday evening before making their way to the Rocky Mountains.  Heading into Wednesday’s match, Kai Koreniuk leads the Galaxy II in goals with nine, while Ethan Zubak and Augustine Williams each have seven goals. Zubak was named on the bench of the USL Championship Team of the Week after a brace in Los Dos’ 5-1 win over the Oklahoma City Energy FC on Saturday at Dignity Health Sports Park in Carson, California.

“We’ll watch and see what LA do tomorrow,” said Switchbacks Interim Head Coach Wolde Harris.  “They’ve been playing well this season and I don’t expect anything less from LA. Of course [Ethan] Zubak and [Augustine] Williams are dangerous players, but if we stay compact and communicate we’ll be in a good way to get a result.  We need to stay compact and slide together defensively and not give LA room in the middle of the park. Our guys should be motivated to compete – I’m looking forward to us bringing high-energy this weekend. Personally, I’d like to thank the fans for their support this season and we look forward to playing in front of them one last time.”

Los Dos’ last trip to high altitude ended in a 5-0 defeat at the hands of the Real Monarchs in Salt Lake City on March 23rd.  The Galaxy II and Switchbacks opened their respective 2019 USL Championship seasons on March 9th at Dignity Health Sports Park in Carson, California, with the Switchbacks earning a 4-1 win behind a hat trick from Shane Malcolm.  Team captain Jordan Burt rounded out the scoring for the Switchbacks, while Ghanaian Geoffrey Acheampong notched the Galaxy II’s only goal in the 86th minute. 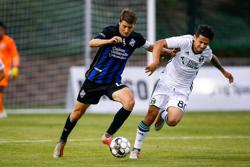 “For me, thinking back on how it felt to get that win – every week you want to feel that way,” said Jordan Burt.  “You always want to go out of a season on a positive note. This week we’re going to put in a lot of work to make it an exciting game.”

Switchbacks winger Shane Malcolm will be available for the hosts on Saturday before making his way to southern China on Sunday to represent the Guam National Team in their World Cup Qualifier against China on October 10th at Tianhe Stadium in the massive city of Guangzhou.  “My focus is here and on our last home game of the season – and possibly my last game of the season,” said Malcolm.  “This weekend is another opportunity to leave the fans with something to cheer for. We play for them, and we haven’t been living up to expectations – their expectations and our own – and Saturday is an opportunity for us.”  The Guam National Team will follow the match in China with a trip to Dubai to face Syria on Tuesday, October 15th at the Maktoum bin Rashid Al Maktoum Stadium in the United Arab Emirates.  Syria will be listed as the home team for the match against Guam, with the game to be played in Dubai due to the ongoing Syrian Civil War.

Captain Jordan Burt will also be available for the match against Los Dos after the Switchbacks’ captain served a one match suspension against the Las Vegas Lights FC last Saturday for yellow card accumulation. 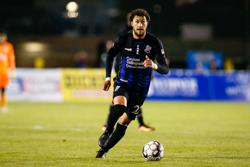 “We want to finish our last home game of the year on a high note,” said Jordan Schweitzer.  “We want to give our fans something to be proud of and to be excited about for next season. We’ll definitely do our homework and watch LA tomorrow night and scout them and make sure we’re as prepared as we can be looking forward and going into this weekend."