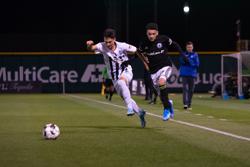 Tacoma, WA (October 12, 2019) – The Colorado Springs Switchbacks FC fell on the road 2-0 to the Tacoma Defiance behind two goals in second-half stoppage time on Saturday night at Cheney Field.

In Alan Koch's first game in charge, the Switchbacks were looking to pick up points away from home in the penultimate game of the 2019 USL Championship season. The Switchbacks created the majority of the chances on the night with Matt Hundley and Saeed Robinson's shots from distance being saved by Trey Muse in the first half.

Cesar Romero had the two best opportunities through the 90 minutes of play as he saw his shot from a tight angle was kick saved by Muse and had another shot deflected by the outside of the post. However, Tacoma wouldn't be denied in the 93rd minute when Joshua Atencio headed Daniel Robles' in-swinging corner kick into the back of the net. Robles added a second goal on a counter-attack deep into stoppage time to seal the victory.

The Switchbacks will end their 2019 USL Championship season on October 19th when they travel to Texas to take on San Antonio FC.