Vargish's View: Colorado Springs Switchbacks Look To Close Out 2019 With a Win 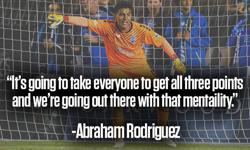 At the time of writing San Antonio FC hold the final playoff place in the USL Championship Western Conference, as Head Coach Darren Powell’s team will go into their final match tangled in a seven-team battle to see which four clubs can clinch their places in the 2019 USL Championship Playoffs.

“We’re just focusing on ourselves,” said Switchbacks Head Coach Alan Koch when asked if the Switchbacks would attempt to play the role of spoilers ahead of Saturday’s match.  “I think if we’d been together all season long we could use that as a motivator, but I think we’ve got enough motivation in terms of us assessing our own players and the players showcasing themselves so we’re just going to focus on ourselves.”

Mexican striker Éver Guzmán was named the USL Championship Player of the Week after notching the first hat trick in San Antonio FC’s history in a wild 4-3 win over the Portland Timbers 2 last Friday in the Rose City on the banks of the Willamette River.  Midfielder Walter Restrepo was also a starter on the Team of the Week alongside Guzmán. San Antonio FC have now scored eleven goals in their last four matches, with Saturday’s match at Toyota Field being the first game San Antonio have hosted since they defeated Fresno FC 2-1 on September 28th. 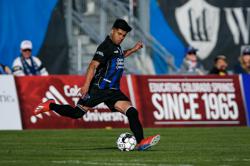 “We’ll start off this week worrying about ourselves,” said Rony Argueta.  “It’s a tough place to play and they’re a good team, but as coach just said; it’s a final for us.  We’re treating it like a cup final. If we all treat it that way and we take it seriously and all do our duties and do our jobs, we can get this win.  With Coach Alan coming in with two weeks left before the end of the season, we’re treating it like a rebuilding phase and preparation for next season.”

“It’s going to take the whole team to get a win,” said Abe Rodriguez.  “It’s been a rollercoaster and it’s going to take everyone to get all three points and we’re going out there with that mentality.”  Rodriguez was named the Colorado Rapids Academy Player of the Year last week during the Rapids’ annual awards.

Switchbacks captain Jordan Burt was forced out of the Switchbacks’ 2-0 loss to the Tacoma Defiance in the 21st minute last Saturday night in northwestern Washington due to injury, but was hopeful of a return when asked about his status on Tuesday morning.  “I don’t know right now, but I will try to play,” said Burt. “It’s a day-to-day thing right now but I want to finish this season and finish what we started.” 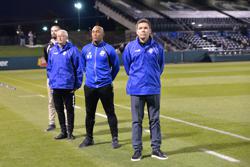 “I’m not sure yet how many changes we’ll make – we want to check medically on a couple guys and see where they’re at and see how they perform in training,” said Head Coach Alan Koch.  “Nothing is going to be given to anybody; the guys are going to have to work hard to get their chances, but the players who work hard this week will be rewarded at the weekend. First is preparation as a group.  I think there were a few of the things we asked the guys to do last week that they did – they wanted to do everything, but it’s impossible to do everything in a few days of training and then now in the second game just another assessment.  Just assessing the group of players. We’ll make a few changes, we’ll give some of the guys an opportunity to showcase themselves and assess them before we make some decisions once we finish the season.”

The Switchbacks will spend time training in the altitude of the United States Air Force Academy and at Weidner Field before making their way to Texas on Friday morning.  Temperatures for Saturday’s match are forecast to be in the low 90’s in America’s seventh largest city over the weekend, with San Antonio FC knowing they need a win in their final match of the 2019 regular season.

“We have to have a good week of training this week and get organized and prepare and give it our all when we get down there,” said Kris Reaves.  “We’ve got some guys with little nicks so we have to stay together and stay organized. We’re not too concerned about them – we’re focused on us this week so we can give a good performance.”