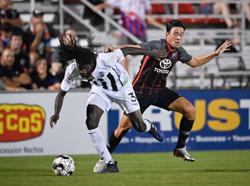 San Antonio, TX (October 19, 2019) – Down a man and down two goals, the Colorado Springs Switchbacks FC battled back for a gritty 2-2 draw on the road to San Antonio FC in the 2019 season finale.

The Switchbacks came out as the aggressors in the early stages of the game. The pressure nearly paid off as Austin Dewing scored off his back from a corner kick that was judged to be offside in the opening five minutes. At the half-hour mark, Abdul Rwatubyaye was shown a red card for a tackle inside of the penalty area. Pecka buried the penalty to give San Antonio the lead as the Switchbacks would have to play the final 60 minutes down to 10 players.

San Antonio was awarded another penalty shortly after half-time, this time Jack Barmby finished from the spot to give the hosts the 2-0 lead. Jordan Burt found himself high up the field in the 68th minute as he put in a hard cross on the ground that Ebenezer Ackon turned into his own net to pull a goal back for the Switchbacks. With only seven minutes from full time, Ish Jome whipped in a free-kick to a rising Tucker Bone who headed home his first professional goal to equalize for the Switchbacks. San Antonio had the ball in the back of the net late, but it was also judged to be played by a player in an offside position. Bone's first professional goal proved to be the deciding goal that pushed San Antonio FC below the playoff line at full time, as current results had New Mexico United beating the Las Vegas Lights FC 1-0 at half time.