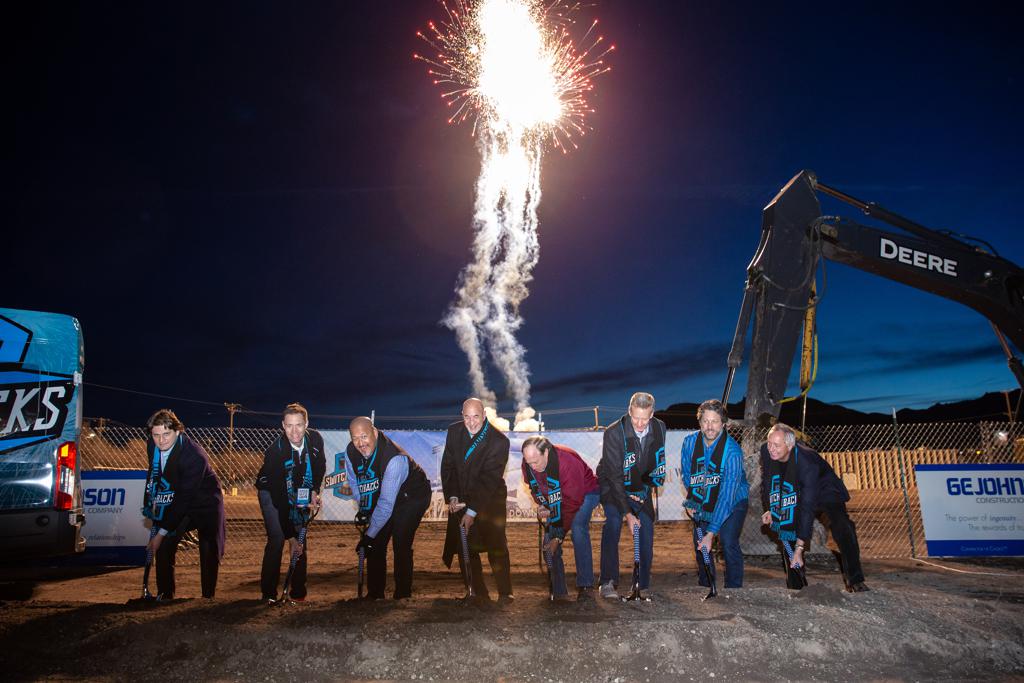 "Words can't describe how pleased I am to see this project break ground after six years of effort. The downtown stadium is a game-changer for Colorado Springs on many levels," said Switchbacks President, Nick Ragain.

The Downtown Stadium will be a multi-use facility that can accommodate a variety of sporting and entertainment events. Located at the CityGate property, the Downtown Stadium site is bordered by Cimarron St. to the North, Moreno Ave. to the South, Sierra Madre St. to the West and Sahwatch St. to the East. The strategic downtown location allows for high visibility, access to amenities, and special experiences for participants and spectators.

Ed Ragain and Dean Weidner are partnering with GE Johnson and Perkins & Will to build the stadium in Downtown Colorado Springs. The facility will serve as the permanent home for the Colorado Springs Switchbacks FC with an anticipated 8,000 seats. It will encompass a synthetic turf field with organic infill for competition and an approximately 145,500-square-foot stadium overall. The Switchbacks FC are a part of a $2.3 billion downtown redevelopment including the new US Olympic and Paralympic Museum.

The Downtown Stadium will play host, along with the Rocky Mountain Athletic Conference and the NCAA, to the NCAA Division II Men's and Women's Soccer Championship in 2021. The championships, which are typically held a weekend apart in early December, is the first prestige soccer event added to the new venue's schedule.

"Having a downtown stadium is a win for the club and the community. The Switchbacks are an ambitious organization with a bright future and this stadium will help boost the club from both an economic and competitive standpoint," said Chief Operating Officer of the USL, Justin Papadakis.

The Switchbacks will open play in the Downtown Stadium in the Spring of 2021 for the USL Championship season.

Deposits are available HERE right now! You can get your Downtown Season Membership with a $25 refundable deposit for unlimited seats. A $100 deposit is also available for premium seating.

Switchbacks President, Nick Ragain, announced that the club will have a modern new crest and a unique color scheme to go along with the Downtown Stadium in the 2021 USL Championship season and beyond for the franchise.

"The goal with this brand refresh was to simplify the mark and color scheme without losing the meaning behind important elements," said Ragain.

Blue and black will feature as the primary colors for the club while grey and white will serve as the accent colors.

"The outer 'S' shape (displayed in blue) is subtle and it has always been a part of the Switchbacks mark but here we are drawing more attention to it. Ultimately the 'S' shape is the intended focal point as the letter 'S' is central to names 'Springs' and 'Switchbacks', plus the shape of a switchback is an 'S'," Ragain added.

The core of the logo emphasizes the "S" shape flowing right to left to right to left portraying the movement of the switchback roads that mark the climb to Pikes Peak. The outline of the shield is broken to reveal the letter "S" standing for "Springs" and "Switchbacks".

The peak of the logo is a symbolic representation of Pikes Peak and the scenic, mountain backdrop from the Colorado Springs view.

The five stripes represent the five military bases in Colorado Springs that make up our community.