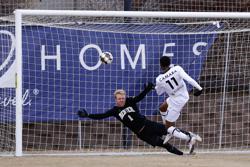 By: Cody Costra
Colorado Springs, CO (March 1, 2020) – The Colorado Springs Switchbacks FC defeated the University of Denver 4-2 at Weidner Field on Sunday afternoon in the final preseason game leading up to the 2020 USL Championship season.

Coming off of a 1-0 win over the Air Force Academy on Saturday, the Switchbacks were looking to keep the momentum going for the teams opening game in the USL Championship on March 7th in Oklahoma City. Mamadi Camara opened the scoring just after the half-hour mark by smashing home a cross that found it's way across the box.

The Switchbacks doubled the lead after Austin Dewing ran through the defense and finished his own rebound. DU pulled a goal back before Colorado Rapids Academy player, Will Vint, snuck a free-kick inside the near post to extend the Switchback's lead to 3-1. Sebastian Anderson extended the lead when his left-footed shot curled around the keeper into the side netting. DU added a second goal four minutes from full time.

With today's win, the Switchbacks' end preseason with a 3-2-1 record before focusing on the regular season.

The Colorado Springs Switchbacks FC will open league play in the USL Championship on March 7th when the team travels to Oklahoma City to face the Energy FC. The Switchbacks home opener is set for March 14th where the team will face San Antonio FC in a rematch of 2019's final game of the season that resulted in San Antonio missing the playoffs. Tickets are available HERE.