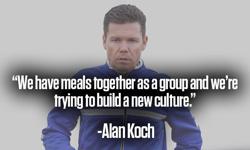 Back-to-back preseason wins have the Colorado Springs Switchbacks FC primed to begin the 2020 USL Championship regular season next Saturday evening against the Oklahoma City Energy FC at Taft Stadium in the Sooner State.

“It’s been a good preseason,” said Sebastian Anderson who scored one of the Switchbacks’ four goals as the Switchbacks ran away 4-2 victors on Sunday afternoon against the University of Denver at Weidner Field.  “We flew to Utah and some of the games weren’t our best, but spending time together 24/7 was super helpful. We bonded as a family and that helped us a lot. It was good to come home today and get a result – the team is coming together and to get the win today was good for us.”

The Switchbacks were greeted by chilly and windy conditions upon returning to Colorado Springs from their exploits in the Wasatch Winter Cup in Salt Lake City.  On Saturday the Switchbacks defeated the Air Force Falcons 1-0 on the campus of the United States Air Force Academy before hosting the University of Denver on Sunday afternoon at Weidner Field.

“It’s not the coldest Switchbacks game I’ve been to, but it’s close,” said a bundled-up Brittany Sharp, who watched the game on Sunday alongside her family.  “We came to every home game before we had our baby and now we make it as frequently as we can. The players are the most important thing to us – how invested they are with the fans and how they know us and our daughter by name, that means a lot to us and I don’t think you can get that anywhere else.”

Wintery conditions forced the cancelation of the Switchbacks’ planned preseason match against New Mexico United at the University of New Mexico Soccer Complex on February 8th, but didn’t hamper the trip to Utah for the Wasatch Winter Cup in which the Switchbacks played three games. 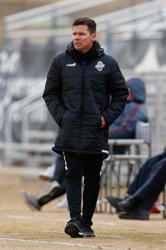 “The trip to Utah was awesome and I think it was very useful playing against three good teams,” said Switchbacks Head Coach Alan Koch.  “The games were good exercises – it allowed us to train more than we normally would and we didn’t have to worry about the weather elements because we were indoors so that was a nice reprieve.  The rest of preseason has been challenging, to be honest, with the weather. It sounds like the weather has been worse now than it has been for a few years so we were improvising being indoors, outdoors, training in the snow.  I wish preseason was a little bit longer but we’ve made the most of what we have.”

Just six players on the 2020 roster have previous experience with the Switchbacks as integrating new faces has been one of the keys of the preseason.  “We’ve done a lot of team bonding experiences,” said Head Coach Koch. “Going to Utah was positive from that perspective. We’ve been trying to integrate the group as best as possible.  We get together in the morning, we train, and then afterwards we spend time together after training sessions. We have meals together as a group and we’re trying to build a new culture. The group’s come a long way, it really has, but I always want more time.  Preseason is a challenge at the best of times, but when you bring in as many players as we’ve brought, it takes time and it makes you realize that building a team truly is a process.” 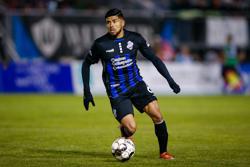 “In this last week of preseason we will look to finalize the details for Alan’s style and how to play our best game,” said veteran midfielder Rony Argueta.  “There are a few things we need to work on and I’m excited for another few days here to get things right. During the trip away we were able to focus on training every day and it helped us a lot off the field too and in that sense it was very important to us as a group that has a lot of new players.  We’ll focus on the details this week and get ready for a difficult trip to start the season.”

Despite another dusting of snow late Sunday night, conditions for the first week of March look surprisingly balmy in both Colorado Springs and Oklahoma City as the Switchbacks will make their final preparations for the start of the regular season.

“This next week will be about fine tuning and tactically how we’re going to play against Oklahoma City and how we’re going to play in their stadium,” said Head Coach Koch.  “Fitness wise we’re at a good place and I think the fact that we got everybody time against Air Force and DU was a huge part of finishing off preseason the right way and pushing as many players as possible to play 90 minutes so that everybody is hopefully at a good place match-fitness wise.  I’m happy with the group. I like the players, I believe in the players, I think we’ve done a good job of bringing in who we want within the resources we have, but now it’s about coming together. When essentially you retool a team, it takes time. I’d like us to come out of the gates blazing but we’ll see what unfolds and if we have to be patient; we have to be patient as we build.” 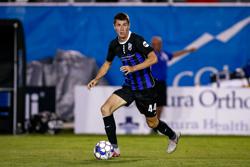 “It’s been a really good and solid preseason overall,” said Jordan Burt.  “It’s been refreshing to be a part of a new group and a new system and it’s going to be really exciting to see and be a part of how it all comes together.”

The Switchbacks will return to Weidner Field after their trip to OKC as they host San Antonio FC on Saturday, March 14th at 3:30pm MT.