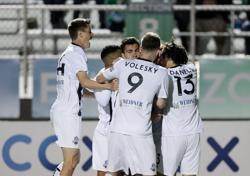 By: Cody Costra
Oklahoma City, OK (March 7, 2019) – The Colorado Springs Switchbacks FC picked up all three points on the road in the season opener with a 2-1 win over the Oklahoma City Energy FC Saturday night.

Christian Volesky got the Switchbacks on the board first in the 16th minute against his former club. Aidan Daniels set the goal up with a ground cross from the right side of the box that found the foot of Volesky before his initial shot was saved and he finished the rebound.

Energy FC found an equalizer in the second half when Atiba Harris got his head on a cross from a free-kick. The Switchbacks would find the eventual winner in the 78th minute when Uvaldo Luna fired in a low cross and Energy FC defender, Tucker Stephenson, turned the ball into his own net. The visitors would see out the lead for a 2-1 win on the road to open up the 2020 USL Championship season for the Switchbacks.

The Colorado Springs Switchbacks FC home opener is set for March 14th where the team will face San Antonio FC in a rematch of 2019's final game of the season that resulted in San Antonio missing the playoffs. The first 500 fans in Weidner Field when gates open at 2:30pm will receive a Switchbacks cowbell, courtesy of The Gazette. Tickets are available HERE.