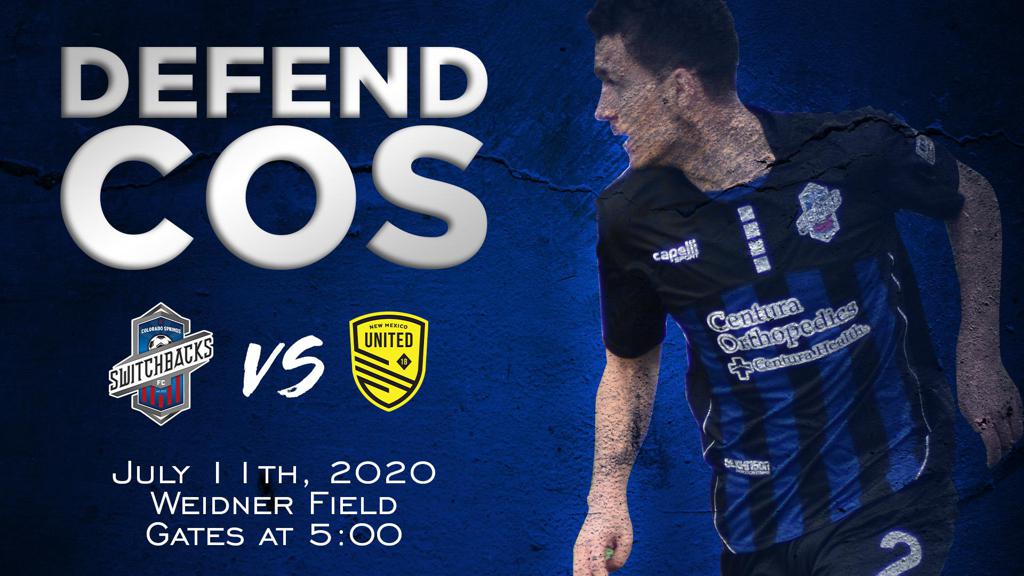 Colorado Springs, CO (July 2, 2020) – The USL Championship announced today the opening weekend of games that will kick off the league’s resumption of the 2020 season. The Colorado Springs Switchbacks FC will host New Mexico United on July 11th at 6pm MT (5pm MT gates open) for the club's 2020 home opener. at Weidner Field.

Nine USL Championship games are scheduled between July 11-13, with five of those contests to be aired live on ESPN2 and ESPN Deportes. The remaining games will all be available on ESPN+.

Saturday’s action will also include a showdown between Indy Eleven and Saint Louis FC at Lucas Oil Stadium where both teams will be looking to pick up where they left off after emphatic wins to start the campaign. Also in the Eastern Conference, the Tampa Bay Rowdies will host Atlanta United 2 at Al Lang Stadium, while out West, Colorado Springs Switchbacks FC will host New Mexico United at Weidner Field and Texas rivals El Paso Locomotive FC will welcome Rio Grande Valley FC to Southwest University
Park.

Sunday evening will bring the spotlight to Louisville City FC’s Lynn Family Stadium, with the $65 million venue set to host its inaugural game live on ESPN2 and ESPN Deportes as LouCity faces a 2019 playoff rematch against Pittsburgh Riverhounds SC.

Monday night then brings two games from the Western Conference, with Black Gold Derby rivals OKC Energy FC and FC Tulsa set to square off at Taft Stadium in a game that will air live on ESPN2 at 7 p.m. ET. Sacramento Republic FC and the Tacoma Defiance will then provide the nightcap on ESPN Deportes, with kickoff at Papa Murphy’s Park slated for 10 p.m. ET.

A complete schedule for the resumption of the 2020 USL Championship season will be released in the coming days.