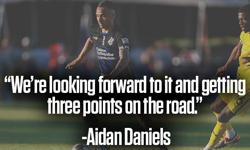 For the first time this season, the Colorado Springs Switchbacks FC head west across the Rocky Mountains as they face the Real Monarchs SLC at Rio Tinto Stadium in Sandy, Utah on Saturday afternoon.  The Switchbacks will look to bounce-back to winning ways after an early-evening robbery saw them fall 2-1 to New Mexico United last Saturday at Weidner Field.

“We created enough chances to win the game last weekend,” said Switchbacks veteran Jordan Burt.  “If you’re looking at New Mexico’s goals objectively, they had one good goal and the other one is a miracle goal.  We played good football and that’s all you can ask for regardless of the result and now it’s just putting the pieces together in terms of that final piece.  Now we’re just focused on the trip to Salt Lake.  Generally, I feel like the guys are excited about how we can play and are eager to prove ourselves this weekend.  Salt Lake have a completely different roster than last year but they’re in the same style and same system and Rio Tinto is a giant stadium so I expect that they’ll want to possess a lot, but from what I’ve seen I think we’ll have our opportunities to exploit some weaknesses.”

“We’ve looked at last weekend already; we’ve looked at it a lot,” said Switchbacks Head Coach Alan Koch on Wednesday afternoon.  “When you actually look at how we tried to play, I think there were many positive moments during the course of the game. Obviously, we didn’t put that together for 90-plus-minutes otherwise we would have won the game, but we’re one decision away from going 2-1 up with a few minutes to go and we’d have a whole different perspective on that game if that had gone our way.  We focus on a lot of positives but we’ve also identified areas we need to grow and this is a project – we’re building a team and we want things to happen quickly but it may take us a bit of time and we’ll go one game at a time.  Training this week has been good.  We’ve got a couple injury concerns but we’ve still got another day of training to assess the players and then obviously, whoever hops on the bus will be fit and cleared to play.  We’ve got some decisions to make in the next 24 hours but hopefully we’ll be as close to 100 percent availability-wise as we can get.” 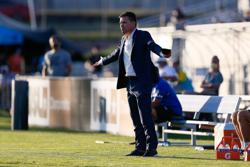 “Obviously with Covid travel we’re not really going to be able to interact that much,” added Koch.  “Everybody is going to have to be sitting in set seats, and masked-up.  Normally an away trip will give you leverage to go and have conversations and interact and joke and really just get to know each other at a different level, but because of all the protocols that’s not going to be possible on this trip.”

Canadian Aidan Daniels scored a stunning equalizer for the Switchbacks against New Mexico United at the end of the first half on Saturday, before George Lebese’s go-ahead goal was dispiritingly ruled out for offside.  “It felt good to score – anything to help the team do well,” said Daniels.  “Unfortunately, we weren’t able to get the win, but it was nice to get on the score sheet.  I think Saturday really showed us that we can play – I thought we dominated the game in terms of possession and our movement and ultimately it gave us 90 minutes under our belt and that fitness component is the biggest thing for us going forward because we all know we can play with the ball so it’s just digging in during those final moments and pushing through the full 90 minutes.  I think getting the first game out of the way, even though we didn’t get the result that we wanted, has set a platform for us to move forward and push on.”  Daniels’ strike was nominated as a contender for the USL Championship Goal of the Week. 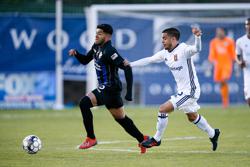 Twenty-four players have featured for the Real Monarchs in the 2020 USL Championship season.  James Slayton and David Ochoa have each played in goal for Head Coach Jámison Olave’s team, with Slayton starting last Saturday in the aforementioned loss to San Diego Loyal.  Trinidad and Tobago youth international Noah Powder will be available to face the Switchbacks after serving a one match suspension last weekend for a red card the defender received during the Monarchs’ 1-0 loss to San Antonio FC in early March.

“We know they’re a team that’s comfortable changing formations – I think they’ve always been that way,” said Head Coach Koch.  “There’s going to be an element of surprise in terms of who they line up with and how they play, but we’ve tried to base our scouting on tendencies as much as possible.  It doesn’t matter who plays; as long as we focus on ourselves and we do what we need to do.  They want to possess and they’re going to try and create space.  They’ve got some very good technical players and some very good athletes too.  They’re a good combination of speed-can-kill and they can also try and hurt you with their brains.  We’re looking forward to it.  We had success on the road pre-pandemic and we’re going to go in with a mentality that we want to get a result on the road again this weekend.  We’re excited.  No matter if we play home or away we want to try and achieve the same outcome.” 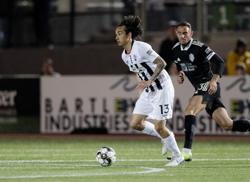 “This week we’ve been dealing with the different formations that we’ve scouted that they might play,” said Aidan Daniels.  “We played the Monarchs in pre-season and they played a different formation than what they lined up with in their last game so we need to deal with that.  All in all, the guys on the team are all pretty close, so ten hours on the bus is going to be a fun trip.  We’re looking forward to it and getting three points on the road.”

The Switchbacks and Real Monarchs SLC will meet three more times in the 2020 USL Championship season.  On Saturday, August 1st the Switchbacks host the Monarchs at Weidner Field, before Alan Koch’s team make a midweek trip to Sandy, Utah on Wednesday, September 9th.  The Switchbacks play their final regular season home game of 2020 on September 26th at Weidner Field against the Real Monarchs, in what could be a make-or-break game for playoff positioning in Group C.