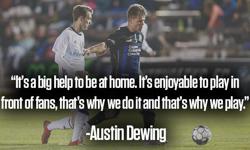 On Sunday afternoon, the Colorado Springs Switchbacks FC welcome Austin Bold FC to Weidner Field in a key early-season USL Championship matchup.  It will be the only meeting of the 2020 campaign between the Switchbacks and Bold, with Sunday’s opponents being realigned into separate groups following the suspension of the season due to the global coronavirus crisis.

Last Saturday in Sandy, Utah the Switchbacks fought back to tie the Real Monarchs SLC 3-3 after goals in the 89th minute from Jordan Burt and in the 5th minute of stoppage time from Abdul Rwatubyaye.  Rwandan international center back Rwatubyaye was named on the USL Championship Team of the Week following Saturday’s match.  “It means a lot because this is my second season and I’ve never made Team of the Week so I’m very thankful and I think this is a really good opportunity for me to be seen so it’s really an honor and it’s going to push me to be in the first eleven next week and after that,” said Rwatubyaye on Tuesday.

Jamaican international Andre Lewis will be suspended for the visit of Austin Bold after the midfielder was sent off in Saturday’s draw in Utah.  Sunday will be Austin Bold’s first away trip of 2020, and a short turnaround after Head Coach Marcelo Serrano’s club host FC Tulsa at Bold Stadium in Texas’ capitol city late Thursday evening. 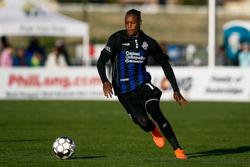 “We would like to watch on Thursday as a group but I don’t think it’s going to be possible during this hard time,” said Rwatubyaye.  “I think we will have to watch them individually which is a big opportunity for us to see how they play and to see how they come out on Thursday.  It will give us some things to work on in practice on Friday and Saturday so we will be ready for the game on Sunday.  We have to work this week and the coaches are always telling us to be concentrated and to have the right technique and to be motivated in practice and to have the quality in practice that will help us in the game.  When you have your head up in practice, that’s where you see that you’re prepared to play the game.  As a team we have to work on our defensive side – we have to work on not conceding goals in the next few games, which is a very important thing.  The game on our mind is Austin.  We talked about last week and we looked at it, but now it’s about Austin.”

Thursday’s match between FC Tulsa and the Bold will be a key fixture in Group D of the USL Championship.  “We’ll watch their game Thursday,” confirmed Switchbacks Head Coach Alan Koch.  “We know they are flying up so really they’re going to have enough time to be recovered.  If they were hopping on the bus and busing up then I think then it would impact how we would play because you’d expect them to be absolutely exhausted but they’re fortunate enough to be able to fly, so Thursday’s game doesn’t really change the game that much – they should have ample time to recover.” 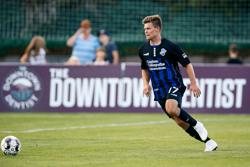 “We will definitely get some film from Thursday and be aware of what happened,” said Austin Dewing.  “We’ll watch it, but most of all I think this week will be focusing on what we can do better.  We could have won both of the first two games back from the Covid break if we had been sharper.  I think we need to fix the things that we can control and we’ll worry about Austin when we need to.  It’s a big help to be at home.  It’s enjoyable to play in front of fans – that’s why we do it and that’s why we play.  Being able to at least have some fan participation – albeit limited – makes it really enjoyable to play the game and it’s a big boost for us as far as keeping the energy high and being able to kind of suck the life out of the other team.”

Dewing gave the Switchbacks an immediate injection of energy as the former United States Air Force Academy star came off the bench against the Real Monarchs last weekend in Utah.  “If we’re being honest I try and bring full energy and high-intensity as a player no matter if I’m starting, playing a couple minutes, playing real significant minutes, or if I don’t even get on the pitch,” said Dewing.  “It’s about what can I do to help the team and if that is five minutes at the end or if that’s a whole 90 then so be it.  Either way I’m prepping in the same way, I’m prepared to play the whole game and then prepared to do whatever the team needs me to do to help get us in that win column.” 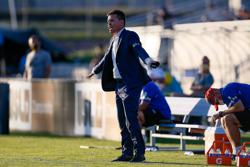 “He has shown that he can come off the bench and make an impact,” said Head Coach Koch when asked about Dewing’s recent performances.  “I think he can have the same impact from the start, we just have to determine in each individual game what’s the best approach – is he better from the start or to come off the bench?  He can do both.  He’s shown so far that he has an impact off the bench, but he’s also showed us in training that he can come in and make it a sustained performance.”

The Switchbacks will be back at Weidner Field next weekend as they take on the Real Monarchs of Salt Lake City on August 1st in Colorado Springs.

“We’re using this abridged season as a major assessment of our group and trying to build something,” said Head Coach Koch.  “Through our first three games of the season you can see what we’re trying to build, but now we need to continue to progress with that.  This is a project and we’re working incredibly hard with every player and the entire group to move forward, and you can see in every game we’ve played that there are positive steps and we want to make sure we’re seeing those positive steps in every game as we continue to work with the group.”