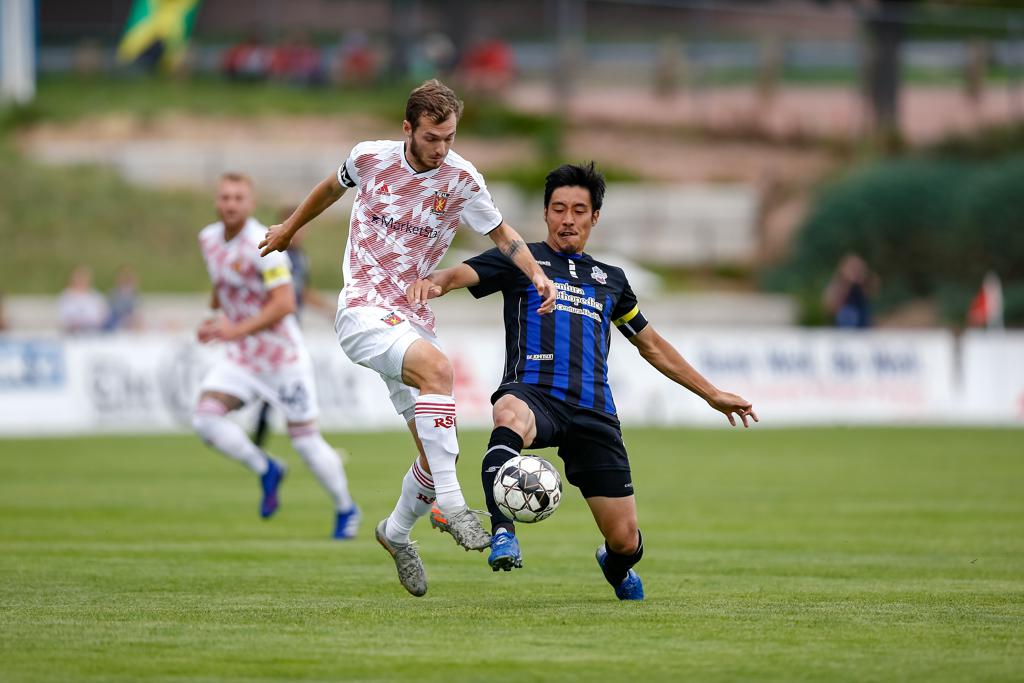 Colorado Springs, CO (August 1, 2020) – The Colorado Springs Switchbacks FC lost 2-1 after a stoppage-time goal in the rematch against the Real Monarchs SLC.

Both teams traded opportunities in the early stages of the game with the best chance falling to the foot of Switchbacks forward, Austin Dewing, who created his own space and fired a shot that was saved by James Slayton. The Switchbacks had another opportunity to take the lead from a free-kick when Arturo Diz Pe rose up to head his effort on target but Slayton managed to make the save into the crossbar. Ten minutes till halftime, Jack Blake put the Monarchs in the lead by placing his penalty kick into the bottom corner.

The Switchbacks had the opportunity to equalize in the second half after Aidan Daniels was pulled down in the box to earn a penalty. George Lebese stepped up and calmly slotted the penalty into the bottom corner, sending Slayton the wrong direction for his first goal with the Switchbacks. The Real Monarchs took all three points as Taylor Peay turned in a redirected free-kick three minutes into stoppage time.

The Switchbacks will be on the road next to face El Paso Locomotive FC at Southwest University Park on August 8th and New Mexico United on August 15th before returning to Weidner Field to take on El Paso on August 22nd.

Alan Koch
On what he could take from tonight's game:
"The positive is we are going toe to toe with the champions, and we said we’re playing in the group of death, and you can see they’re a quality team. It still hurts. Nobody likes to lose right at the end.  I think we’re a team that’s growing and we’re trying to build something. It would be almost too easy, I’m sure we would like it, but it would almost be too easy if we went from the bottom of the table, where this club finished last year, to the top like that. We are building, and building something takes time.  You can see the growth out there tonight.  Everybody can. You can see how we’re playing. You can see the strength of our players. I just think we’re not putting a 90 plus minute performance together, and that’s why we lost tonight.  But we’re showing substantial growth, individually and collectively. We created all sorts of opportunities tonight. You can see we’re playing a good brand of soccer, and we are excited about where we’re going. But losing tonight, obviously, still hurts. That’s for sure."

On the Switchbacks losing deep into stoppage time:
"Honestly, I think it’s one word. Concentration. We said that to the guys at the last water break, the hydration break.  It’s, 'We’ve got 15 plus minutes to go. Now it’s about concentration.' When you’re getting mentally, physically fatigued … this is when it matters the most. And you can see how guys are pushing themselves, but we’re not quite there yet. We’re trying to build, and we put together, what, a 90-minute performance tonight, and not a 95-minute performance. So we’re pushing, but the biggest word I would say is concentration. Concentration in the minor details when we’re attacking, but also concentration when we’re defending.  To concede, obviously, on a set-piece at the end there is incredibly frustrating.  It’s what we did to them at their place, and now they’ve come to our place and done it here too. We’ll learn, we’ll grow, and, hopefully, continue to grow from it."

George Lebese
On his overall thoughts on the game:
"It's a little disappointing, you know? I think we played well. We should’ve at least gotten a point. I don’t know. We can blame it on concentration. But we got work to do. We’re building a solid team here. I’m proud of the lads. We worked very hard. But, unfortunately, we have nothing to show for it."

On scoring his first goal for the Switchbacks:
"It's a 50/50 for me. I’m happy to have gotten a goal today, but it means nothing, honestly, for me, because we didn’t get anything out of the game. If I hadn’t scored, and we got the points, it means something to me. I’d be very happy. But… yeah...it’s just one of those games."

On how the team is coming together in the early stages of the season:
"We are working hard. We see it in training. Together, the whole squad…not only the players that are on the field during the day. I think we’re working very hard to achieve what we want, considering that we are building. We are a building team. But, no excuse. We should be getting results. We have a good team here. We were just unlucky today."

Rony Argueta
On what went wrong tonight:
"We have really good talent, really good players, and, physically, we’re there as well. But it comes down to, I think, just concentration. You know? Those last few minutes where we lose concentration, and then those set pieces get us. We look to mentally stay from minute 0 to 95th, 96th minute. We have to stay focused."

On what he can take away from tonight's game:
"We look forward to El Paso, and we just take the positives.  We’re going to work on the negatives, and what we’re lacking right now, but we walk away with positives.  We had a lot of positives."

On playing at Weidner Field again:
"It's a blessing, definitely. It’s crazy times, but we are just rolling through what we can control and we focus on that. Again, it goes back to just staying mentally ready, and being ready for anything really."