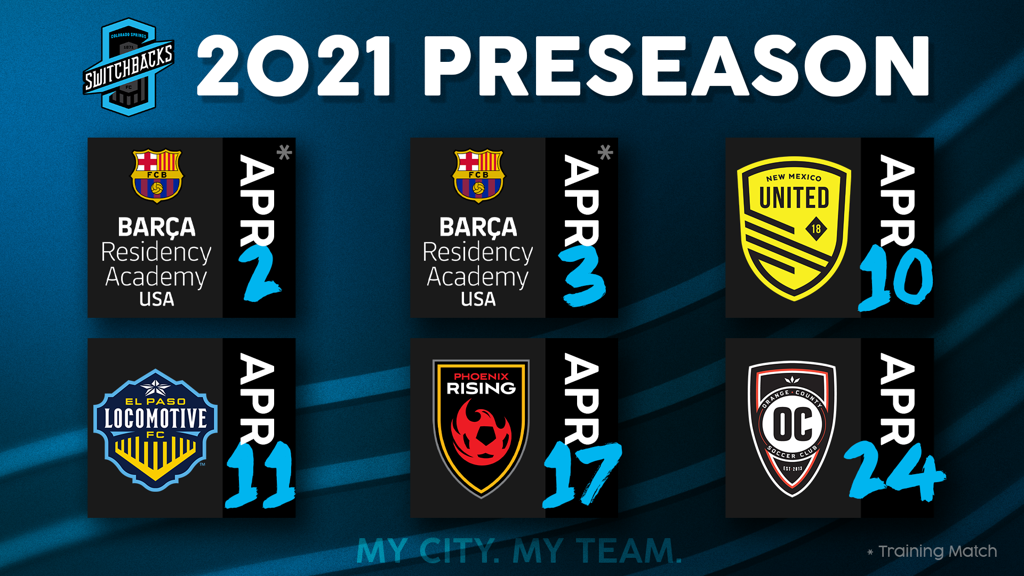 "We are pleased with the work that has been put in so far and starting to see competition from outside the group will be a welcome relief for all of us," said Switchbacks Head Coach, Brendan Burke. "We are still experiencing some difficulty in getting our guys into camp which has been very disappointing from a logistical standpoint but we are confident that the quality of the players coming in will boost the group even more as we enter our final few weeks of preparations for the season. The next few weekends will be important tests for all of us as we establish our identity as a group."

The Switchbacks' open preseason with a couple of training games against the Barcelona Residency Academy Arizona U19 on April 2 and 3.

Next up is USL Championship competition with back-to-back games against Western Conference Semi-Finalists, New Mexico United, and Western Conference Finalists, El Paso Locomotive FC. Both teams have been placed in the Mountain Division along with the Switchbacks for the 2021 season.

On April 17, the Switchbacks take on Phoenix Rising FC, the 2020 Western Conference Champions.

In the final test before the regular season begins, the Switchbacks will face Orange County SC in a Friendly at Weidner Field on April 24. Kickoff is set for 6pm MT in what will be the first ever game at the new Weidner Field in Downtown Colorado Springs. Season tickets are the only way to confirm your tickets today and they can be purchased HERE or call 719-368-8480 to ensure your spot as a new era begins in Colorado Springs history.

All other preseason games will be closed to the public.

The Switchbacks will begin its seventh season in the USL Championship on Saturday, May 1 at San Antonio FC with the Grand Home Opener at Weidner Field set for May 21 vs New Mexico United. All matches will be carried live on ESPN+.

The Switchbacks have been placed in the Mountain Division of the Western Conference along with Real Monarchs SLC, El Paso Locomotive FC, New Mexico United, San Antonio FC, Austin Bold FC, and Rio Grande Valley FC. The Switchbacks will play each team in the Mountain Division four times – twice home, twice away. The remaining eight games will be played against regional or cross-conference opponents to complete the 32 game regular season.