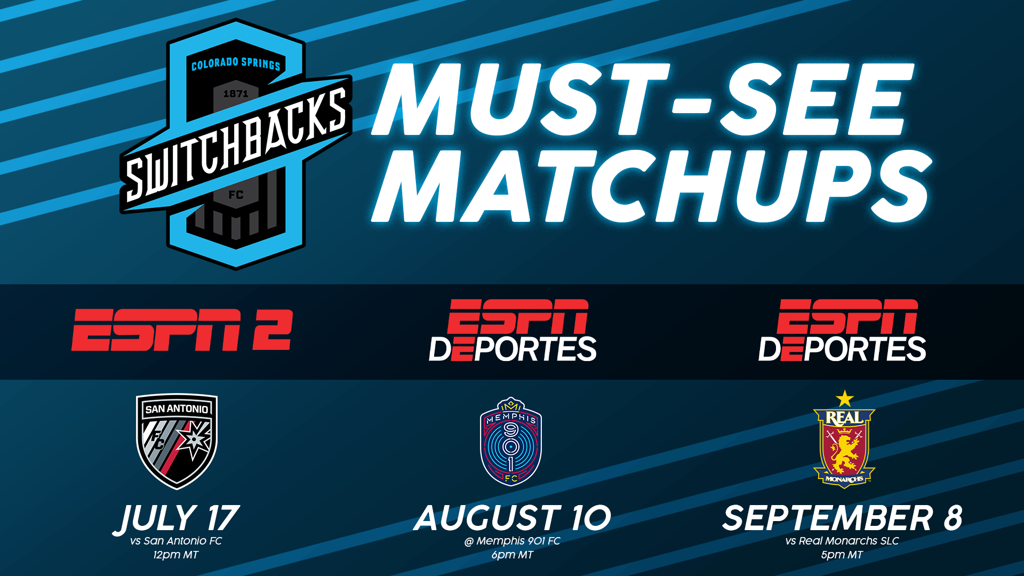 Weidner Field will make its national television debut on Saturday, July 17 as the Switchbacks welcome San Antonio FC to the new stadium in Downtown Colorado Springs on ESPN2.

The Switchbacks will then travel to Tennessee on August 10 to take on Memphis 901 FC for the first ever meeting between the two clubs on ESPN Deportes.

All eyes will once again be on Weidner Field on September 8 when Real Monarchs SLC visit Colorado Springs for another meeting between Mountain Division rivals.

“This is the biggest and brightest platform we’ve ever had for our league,” said USL Executive Vice President Court Jeske. “We are thrilled at the wide selection of games, clubs and landmark moments that will appear on national television this season. It’s a special thing for our league to be able to showcase our clubs and cities across the USL Championship and League One on ESPN’s networks in addition to streaming an incredible schedule on ESPN+.”

The Switchbacks will begin its seventh season in the USL Championship on Saturday, May 1 at San Antonio FC with the Grand Home Opener at Weidner Field set for May 21 vs New Mexico United. The full Switchbacks 2021 schedule can be found HERE.

In addition to the linear schedule on ESPN, ESPN2 and ESPN Deportes, the remainder of the USL Championship and Switchbacks FC regular-season and playoff games will stream live on ESPN+.