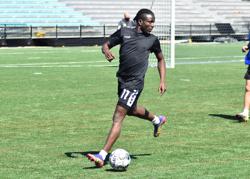 "Today was a very good building block for us, the whole group is very happy with the performance today against a top team," said Switchbacks Head Coach, Brendan Burke. "It is a preseason game in the end but our identity is forming and becoming more clear each week."

Saturday's win takes the Switchbacks preseason record to 3-2-0 ahead of the final Friendly against Orange County SC in the first ever game at the new Weidner Field on April 24.

The Switchbacks will begin its seventh season in the USL Championship on Saturday, May 1 at San Antonio FC with the Grand Home Opener at Weidner Field set for May 21 vs New Mexico United. The full Switchbacks 2021 schedule can be found HERE.