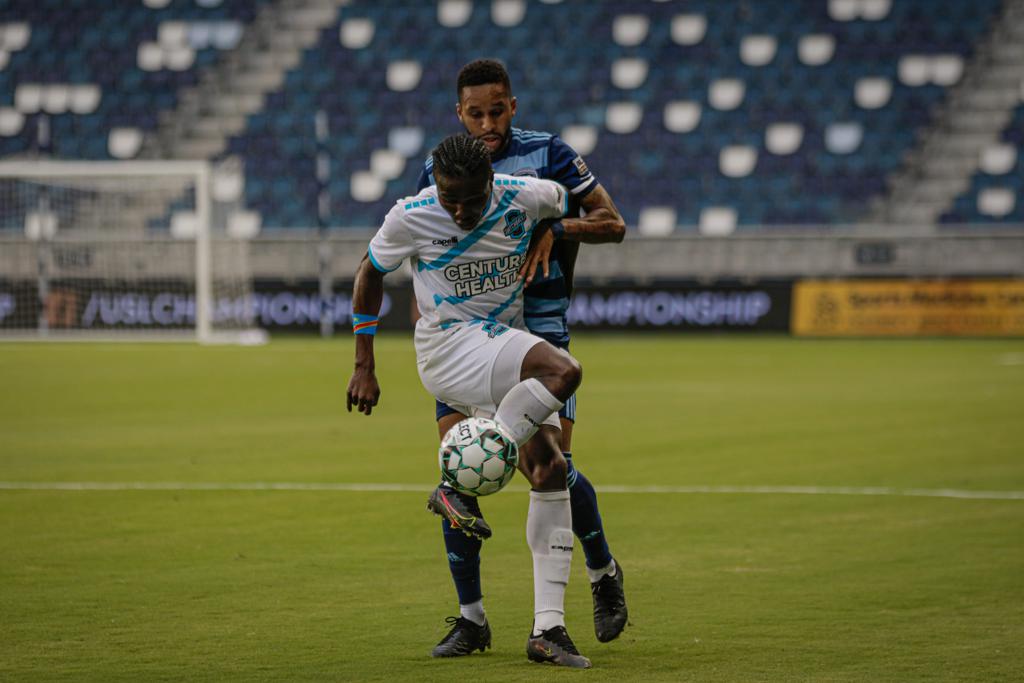 Colorado Springs, CO (May 14, 2021) – The Colorado Springs Switchbacks FC recorded their first win of the 2021 season with a 4-0 win on the road over Sporting Kansas City II.

"It was huge, it was exactly what we needed," said Switchbacks Head Coach, Brendan Burke. "The performance and energy level were fantastic. I think the guys that came into the game off the bench contributed and easily could've added another goal or two, we hit the bar a couple of times. It was really encouraging, it was a bright night for us."

The Switchbacks came out of the gate with immediate pressure that set up an opportunity for Hadji Barry in just the 3rd minute as he got behind the defense and fired his shot off the crossbar. The Switchbacks got on the board in the seventh minute when Matt Mahoney forced a turnover near midfield and found a streaking Michee Ngalina who played a ground cross to the left post where Austin Dewing was there to bundle the ball over the goal line for his first professional goal.

A pair of penalty kicks gave the Switchbacks a prime opportunity to extend their lead before halftime. The first chance came after Jose Torres played a cutting pass to find Barry who rounded the goalkeeper and was taken down. Barry stepped up and made no mistake from the penalty spot, hitting his shot with power to the bottom left corner.

A flurry of shots resulted in a handball for the second penalty. This time it was Michee Ngalina who stepped up, but his penalty was saved by Kendall McIntosh. However, McIntosh left the goal line early so a retake was permitted. Ngalina changed sides and also hit his shot to the bottom left corner with power to set the forward off to do his signature backflip celebration.

"Michee [Ngalina] showed his class on three of our goals tonight to break them down and Hadji [Barry] was sharp as well," said Burke.

Six minutes before the half, SKC's Matthew Constant was sent off for "hands to the face of an opponent" after a challenge with Michee Ngalina. The Switchbacks would go into halftime up three goals with a man advantage.

The Switchbacks added a fourth goal in the second half when Ngalina dribbled to the top of the box before sliding a pass to Barry. Barry's first touch took him past the defender as he fired a left footed shot on the ground and into the side netting on the right side of the goal. The Switchbacks were still pushing and 16 year old Dantouma "Yaya" Toure subbed on for his professional debut. With just twelve minutes left, Toure had a left footed shot from the center of the box that struck the top of the crossbar.

The Switchbacks would hold on till the final whistle to record their first three points of the season with their first four goals and clean sheet of the 2021 campaign.

"It was a tough game. We worked together and gave the same energy, all of us and that's how we get a good result," said Ngalina.

Michee Ngalina was named the Man of the Match for his performance after recording a goal and two assists on Friday night.

"I just put myself into good positions and tried to make [Sporting Kansas City] run all the time," added Ngalina. "I got the opportunity to get two assists and score one goal. I feel so good about the game and we need to keep going."

The Switchbacks next game is the Grand Home Opener at Weidner Field on May 21 vs New Mexico United in the first USL Championship game in downtown, Colorado Springs. Weidner Apartment Homes is the presenting sponsor of the match and the first 750 fans in the stadium will receive a free Switchbacks shirt! Tickets are available HERE.