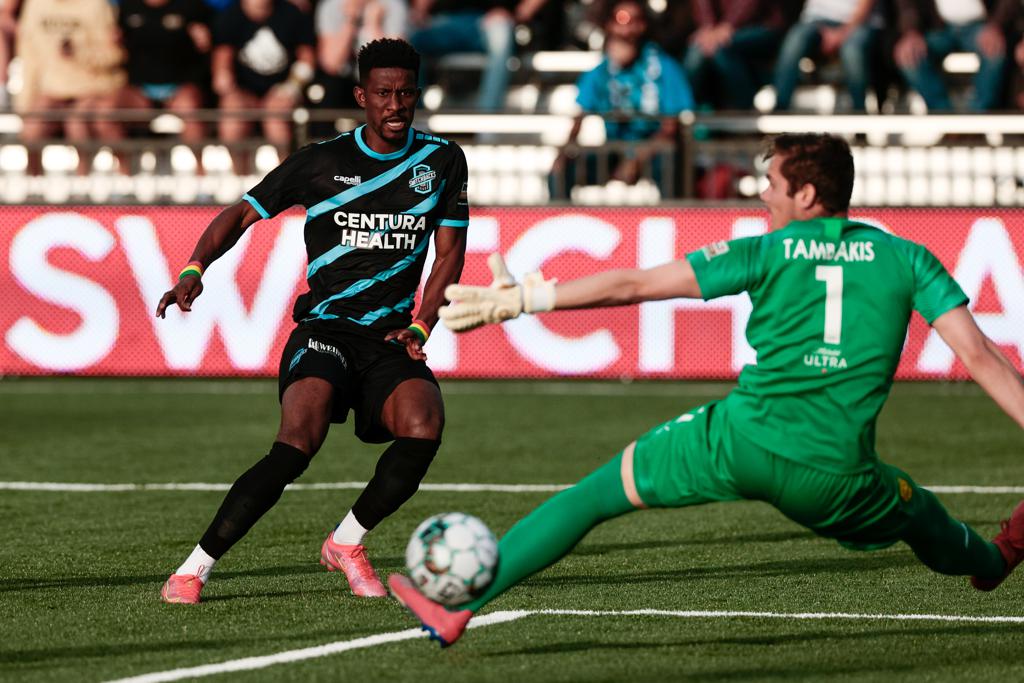 The Switchbacks opened the game with a bang as Austin Dewing played a through ball to the foot of Hadji Barry who opened up his hips and finessed his shot inside the right post just 66 seconds into the game. Barry now owns the first ever goal at Weidner Field in downtown Colorado Springs history with Dewing earning the assist in his final game for the Switchbacks.

New Mexico United equalized in the eighth minute when a deflected cross directed to Sergio Rivas who took a touch and hit his shot to the right side of the goal. The Switchbacks high pressing created an opportunity for Zach Zandi as the midfielder fired off a shot from 23 yards out that struck the base of the right post.

New Mexico got a second goal at the beginning of the second half as Brian Brown played a cross on the ground to Amando Moreno who lifted his shot over Switchbacks Goalkeeper, Andrew Pannenberg, from close range. Deep into second-half stoppage time with the Switchbacks pushing for a goal, New Mexico had a counter attack that set Daniel Bruce free to unleash a shot to the top right corner from the top of the box to extend the visitor's lead with the last kick of the game.

The Switchbacks FC are back at Weidner Field again on June 5 to take on San Antonio FC at 6pm with fireworks following the game. Tickets are available HERE.

Brendan Burke
On the game's result tonight:
"Yeah disappointed, I thought we started obviously very well, I think the first half changed on a tough call where Michee [Ngalina] was off on a breakaway and got dragged down, but they scored a minute later, and then it was somewhat even for the rest of the half. But a more experienced team, as we develop over the next couple weeks and months I think we’ll be able to manage the game a little better than we did tonight."

On the atmosphere in Weidner Field:
"Oh awesome, the fans were great and I know that there’s gonna be more and more out every time we come out, as the restrictions are lifted, and we need to start putting points on the board, and make people understand that they have something they can get behind going forward."

Austin Dewing
On making history with the first ever assist on goal at Weidner Field:
"It means the world to me. I’ve come up through Pride Soccer Club playing on really crappy fields so to play in the nicest field in the entire city if not the state, it’s a pleasure and it’s an honor."

On his feelings about the last game, and message to the fans:
"Oh man, I, I didn’t cry at all. No I mean it’s an emotional time for me, just cuz it’s closing a chapter of my life that has meant so much and it’s tough but I’m grateful for all the moments I did have, and I’m excited to move on. And as I said in my snippet I don’t know if it got played, it truly is an honor to serve and I’m glad to be doing that. And to the fans, I just, I love you so much, and thank you for having me."

Jimmy Ockford
On the key to tonight's early success, and moving forward:
"I think we were buzzing from the start, the energy was there, with the fans and having everybody here almost full capacity and I think we felt that right from the start. We were flying, and maybe we got a little complacent, but moving forward it's learning that we need to stay together, stay on the same page and I think just forgetting about what happens in the past and focus on what we can control now and moving forward.

On playing with Austin:
"He's a great guy, yeah, I love the kid. it’s gonna be hard to see him go, but no matter what I think he’s going to be successful and he’s going to enjoy his time back in the air force."