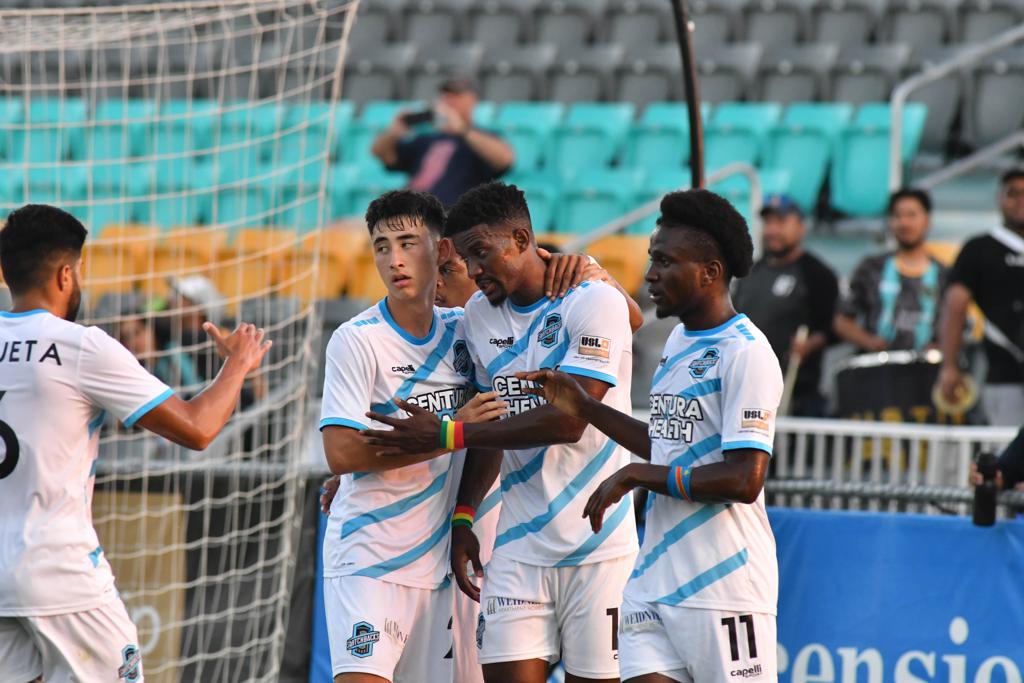 Colorado Springs, CO (June 22, 2021) – Down a man for over an hour and down a goal, the Colorado Springs Switchbacks FC recorded an iconic 3-2 comeback win on the road to Austin Bold FC on Tuesday night.

"Tonight was a statement win," said Switchbacks Head Coach, Brendan Burke. "We still have a long way to go as a group and a club, but we are going to swing away no matter the circumstances. We can't wait to see how this group matures over the course of the season."

Austin got on the board first from a free kick in the third minute that Fabien Garcia curled over the wall and into the net. The Switchbacks would answer quickly after Austin goalkeeper, Hugo Fauroux, tripped up Hadji Barry near the endline after Barry beat him to the loose ball. Barry would send the goalkeeper the wrong direction on the ensuing penalty kick, placing the ball into the bottom left corner.

Owayne Gordon had a free run at goal for Austin in the 30th minute as Lamar Batista caught up and tackled him on the edge of the penalty area. Gordon felt the contact and went down into the penalty area to draw a penalty kick and a red card to Batista. Sean Okoli put his penalty kick into the bottom left corner to give the hosts the lead.

Down a man, the Switchbacks created another opportunity before halftime with a turnover high up the field. Barry picked up the loose ball and found Michee Ngalina on the right side of the penalty area who crossed the ball to Andre Lewis but his shot was saved by Fauroux.

The Switchbacks continued to press in the second half and it paid off as Ngalina once again found space on the right side of the penalty area to place a ground cross to the penalty spot. Barry was the first to react as he blasted a right-footed shot into the roof of the net for his second goal of the night. That goal was Barry's eighth of the season as he now has sole possession of first place in the Golden Boot race.

In the 79th minute, Austin had a cross whipped into the box that found Okoli on the back post but his downward header was kept out by Switchbacks goalkeeper, Sean Melvin.

In the final seconds of regular time, Philip Mayaka picked up a loose ball and drove to the top of the penalty area as Jose Torres forced another turnover in Austin's half. As he reached the top of the penalty area, a defender poked the ball away from Mayaka right to the foot of Dantouma "Yaya" Toure who hit a powerful shot first time into the back of the net to cap off a remarkable 3-2 comeback victory for the Switchbacks.

The Switchbacks FC are on the road on Tuesday as the club takes on Austin Bold FC at 7:00pm MT on June 22. The Switchbacks are back at Weidner Field on Friday, June 25, against New Mexico United with gates opening at 6pm MT. The match is presented by Southwest Airlines with a Fireworks show directly following the match. Tickets are available HERE.