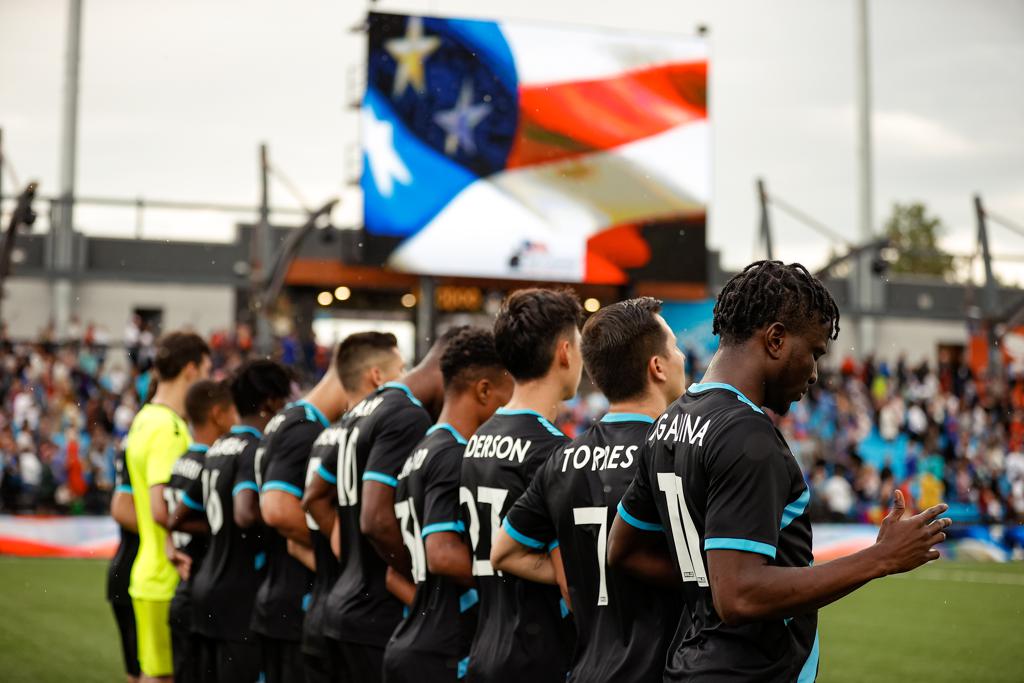 Colorado Springs, CO (July 4, 2021) – The Colorado Springs Switchbacks FC won 3-1 powered behind three first half goals on the Fourth of July in front of a sellout crowd of 8,023 fans at Weidner Field.

The Switchbacks started the game fast when a golden opportunity fell to Deshane Beckford from close range ten minutes in, but he just couldn't get enough contact on the ball to direct it on target. The Switchbacks would find the lead six minutes later as Michee Ngalina played a low cross into the box that Beckford would direct inside the far post for his third goal for the Switchbacks.

Jose Torres played a line breaking pass to find Beckford inside the left side of the penalty area as the Jamaican forward played a slick pass to find Hadji Barry from six yards out as he perfectly timed his run to score his 11th goal in 10 games to start the 2021 season.

The Monarchs cut the deficit in half in the 28th minute as Douglas Martinez found space on the right side of the field before squaring the ball to Aris Briggs who finished from close range.

However, the Switchbacks would restore their two goal lead when Sebastian Anderson played a corner kick from the right side to the near post where Michael Edwards turned his header into the back of the net for the defender's first goal for the Switchbacks.

The hosts stayed on the front foot in the second half as Barry hit a shot first time from the top of the penalty area that would only miss the bottom left corner by mere inches.

After a foul near the edge of the box, the Monarchs were gifted an opportunity to get a second goal, this time from the penalty spot. Noah Powder stepped up to take the penalty as he placed it to the right side of the goal, but Sean Melvin read the shot and came up with a huge save diving to his left.

That would be the final action of the game that saw the Switchbacks win their fourth game in their last five in front of the largest crowd in Switchbacks history.

"I was impressed with the way we started the game, with the number of chances we created throughout the game," said Switchbacks Head Coach, Brendan Burke. "I thought there were three or four more goals in the game for us, so we're still a work in progress and we need to be a little sharper in the final third, but our front three are deadly and they did a great job again tonight. They were all involved in at least one if not two of the goals, so I'm just really happy with how those guys are playing. And everyone else deserves a ton of credit for putting them in good positions over and over again. The team's clicking, we're four out of our last five now, so this is what we’ve been waiting for."

The Switchbacks FC are on the road next to take on New Mexico United on Friday, July 9 at 7:30pm MT at Isotopes Park. The Switchbacks are back at Weidner Field on July 17 against San Antonio FC with gates opening at 11am for a 12pm kick off. This game will be nationally broadcasted on ESPN 2. Tickets are available HERE.