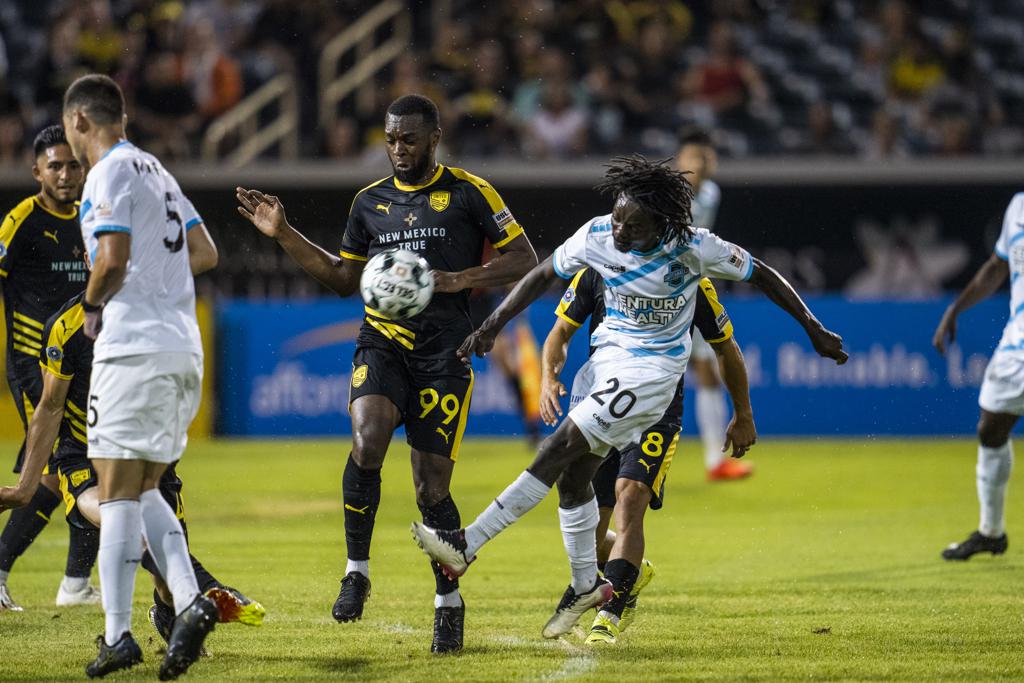 After a 60 minute delay due to inclement weather in New Mexico, the game was underway on a soggy field at Isotopes Park. Sergio Rivas got New Mexico United on the board first after a free kick was played to the left side of the penalty area as Kalen Ryden hit a shot on target that was originally saved by Sean Melvin before Rivas finished the rebound.

The Switchbacks began to grow into the game in the 28th minute when Sebastian Anderson played a cross from the right touchline to the left side of the penalty area that was headed for Michee Ngalina before it was cleared out at the last moment.

The Switchbacks found an equalizer a few minutes later as Steven Echevarria collected a giveaway from 25 yards out before playing the ball to Hadji Barry in the penalty area and Barry dribbled around a sliding defender before blasting his shot into the back of the net. The composed finish from Barry was his 12th of the season, extending his lead at the top of the USL Championship's Golden Boot race.

The visitors were looking to double their lead before the half as Deshane Beckford intercepted a pass and used his pace to create a 1-v-1 opportunity with Alex Tambakis but New Mexico's goalkeeper came up with a foot save to keep the score level at the break.

A physical second half with multiple scuffles eventually lead to a coming together as Sebastian Anderson received a straight red card, leaving the Switchbacks to play with 10 men for the remaining 36 minutes of the game. Even down a player, the Switchbacks would create the next opportunity as Ngalina cut onto his right foot from the left side of the penalty area and fired a shot across goal that Tambakis saved. Moments later, Beckford created space near the right touchline and played a high cross into the box. Ngalina rose up to head the ball to the left side of the goal that required a fantastic save from Tambakis to keep the score level.

New Mexico found a late winner when Michael Azira headed home from a corner kick in the first minute of stoppage time. Ilija Ilic added another goal for New Mexico minutes later as he rounded Melvin and extended the lead to 3-1.

The Switchbacks are back at Weidner Field on July 17 against San Antonio FC with gates opening at 11am for a 12pm kick off. This game will be nationally broadcasted on ESPN 2. Tickets are available HERE.