On Saturday evening the Switchbacks make their way 1,600 miles east to take on Loudoun United at Segra Field in Leesburg, Virginia.  The match against Loudoun United will be broadcast live by the voice of the Switchbacks, Ryan Kaufman, on XTRA Sports 1300 AM and xtrasports1300.com, with coverage beginning at 4:30pm MT.

Loudoun United, the USL Championship affiliate of Major League Soccer’s D.C. United, have endured a rough start to the 2021 season.  Following a wild 5-3 loss at Segra Field on Tuesday night to the Charleston Battery, Loudoun United have logged just two wins this year and have been defeated 12 times.  Thirty-two players have been used by Loudoun United during the 2021 campaign.  For comparison, the Switchbacks have so far fielded 23 players.

“It’s a winnable game,” said Switchbacks Head Coach Brendan Burke when asked about Saturday’s match.  “It’s not an easy game, but it’s a winnable game.  Loudoun gave Tampa [Bay Rowdies] a pretty good run last weekend – Tampa didn’t pull away until about the 76th minute, and that was in Tampa, so we know it’s not going to be a walkthrough by any stretch.  Loudoun are a lot like my old team that was able to make the playoffs two out of the last three years.  They’re comprised of first team players and draft picks so there’s no shortage of talent.  Where they’re at a bit of a disadvantage is that their team changes almost every game, and that’s hard for Ryan [Head Coach Ryan Martin] who I’ve known for a long time.  We’ve talked about it quite a bit in the past but there’s always a lot of talent floating around in those games so they’re really dangerous games for stand-alone teams.” 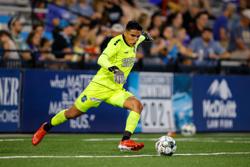 Switchbacks goalkeeper Abraham Rodriguez has been nominated for the Save of the Week in the USL Championship after a strong performance in net as the Switchbacks battled to a 1-1 draw with Louisville City last Friday night at Weidner Field.  “I was happy to help the team get the point,” said Rodriguez.  “Unfortunately, we didn’t get the shutout, but we’ll keep working and stay connected defensively.  We need to take care of our bodies with the games that are coming up and stay concentrated in training and keep doing what we’ve been working on all year.  With so many games coming up we need to stay focused – a lot of guys are going to get minutes so we all have to be ready to step up to the moment.” 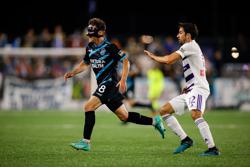 Former Villanova Wildcats standout and Pennsylvania native Zach Zandi started the match against Louisville after missing time with a facial injury.  “It was good to get the minutes in my legs,” said Zandi on Monday afternoon.  “I was a little tired at the end, but that’s expected with the time off I had when I was injured.  I feel good now and I was happy that I was able to get those minutes, but really, I was happy to be able to help the team in any way possible.  I think it was a pretty good result for us – I don’t think either team really deserved to win, so I thought a tie was a pretty fair result.  We have to go out [against Loudoun United] with a lot of energy.  We’re a more experienced team than they are, so we’ll try to use that to our advantage and make sure we put them under a lot of pressure.  There’s a lot of games coming up and [Head Coach] Brendan told us that with all the games after Loudoun, we have to take good care of our bodies and prepare well.  My family will be out there in Loudoun – I’ll probably have like 10 or 11 people that will come down!  A lot of the east coast guys will have some people coming down to support us and make a fan section – it’s the closest game to home for a lot us, so all of the east coast guys will have people there.”

Saturday’s match in the Commonwealth of Virginia begins a hectic two-week stretch that sees the Switchbacks make trips to Austin, Memphis, and Edinburg, Texas, with a home match at Weidner Field against Hartford Athletic on August 7th. 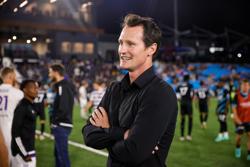 “We do have to plan ahead for periods like this,” said Head Coach Burke.  “Five games in 14 days is just brutal on even the biggest of squads, and we’re the smallest squad, so we have planned ahead.  But as far as the players are concerned, it’s about competing to get into the 11 for this weekend and then go from there.  There will definitely be some movement between cities because we’re on the road the whole time from Loudoun to Austin.  So there may be one or two guys that have to join us in Austin…it’s going to be a grueling two and a half weeks.  This is an important period for us.  I’d be extremely happy If we could pull nine points out of these five games in 14 days, especially because so many of them are on the road, so we need to get off on the right start on Saturday.”

Following Saturday’s match, the Switchbacks will stay on the road as Brendan Burke’s team head to Texas’ capital city to face the Austin Bold on Wednesday, August 4th.  The Switchbacks will return to Weidner Field against Hartford Athletic on Saturday, August 7th for Galactic Night, presented by Centura Health.  The first 4,000 fans through the gates at 6pm MT will receive sabers, courtesy of Centura Health.  Tickets for the match against Hartford are available HERE.