After a win in the outskirts of our nation’s capital, the Switchbacks look to make some noise in the Live Music Capital of the World on Wednesday night against Austin Bold FC.  The match at Bold Stadium will be broadcast live by the voice of the Switchbacks, Ryan Kaufman, on XTRA Sports 1300 AM and xtrasports1300.com, with coverage beginning at 6:30pm MT.

On Saturday night the Switchbacks defeated Loudoun United 3-1 in Leesburg, Virginia behind goals from Michael Edwards, Yaya Toure, and the USL Championship’s leading-scorer Hadji Barry.  Toure’s goal came just a minute after his introduction, with the 17-year-old Guinean running directly to embrace his Head Coach Brendan Burke and his Switchbacks teammates after netting what turned out to be the match winner.

“You love that as a coach,” said Burke.  “It shows that there’s a relationship there and all his teammates were right on top of him as well.  Everyone is happy for Yaya; he works hard, he’s very inquisitive and always asking a lot of questions and he’s been playing his way into more and more minutes for us.” 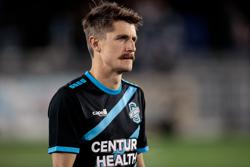 “Everyone was excited for the kid,” said Switchbacks veteran Jordan Burt.  “He is learning how to give us a spark when he comes in and we love him off the field.  It’s always great to see your young teammates do well.  Even though the Loudoun game wasn’t pretty, a little momentum goes a long way – I love competing and grinding out games like that.  Coming away with six points on the long road trip would be huge for us.”

“That was a huge goal for us, especially with the circumstances of what was going on in the game,” said Matt Mahoney.  “It wasn’t our best game and the turf was hard to play on, so to get a second goal kind of solidified the game before Hadji was able to get that huge third goal for us.  Yaya is always working hard and I know Coach Burke trusts him so it was great to see him go over there and give everyone a hug.”

Midfielder Andre Lewis was hugely impressive against Loudoun United, with the Jamaican playing a key role for the Switchbacks before being replaced in the 80th minute.  Head Coach Brendan Burke provided an update on Lewis and Canadian goalkeeper Sean Melvin on Sunday afternoon in Texas.  “Andre is ok and with Sean we’re just being cautious and working him back slowly,” said Burke.  “Abe [Rodriguez] obviously played very well against Loudoun so that allows us extra time with Sean.  Andre should be fine – no major issue for him.  [Zach] Zandi was a scratch because of a hamstring issue and that’s more day-to-day at this point; it’s not a bad one at all, but we did have to scratch him from the lineup before the Loudoun game.”

New Switchbacks signing Thomas Amang could feature against the Bold on Wednesday night, with the Cameroonian striker set to join up with his teammates in Texas on Monday.  “Amang will be down here in Austin,” confirmed Head Coach Burke.  “I’m not sure if he’ll be at the fitness level yet that we want and that we’re comfortable in exposing him to a game, but he’s very close.” 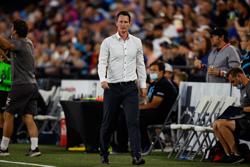 Austin Bold fell 3-0 at Bold Stadium on Saturday night to San Antonio FC in a match that saw the Bold pick up seven yellow cards.  It was the first loss for Head Coach Marcelo Serrano’s team since they fell 3-2 to the Switchbacks on June 22nd.  “With these divisional games, we already play each other so many times that we have a pretty good idea of what we’re walking into on Wednesday,” said Brendan Burke.  “We’ll focus these next couple days in terms of breaking down the video and understanding Austin’s substitution patterns.  There were a lot of guys that came off early for Austin in the San Antonio game and we know that we’ll get a wave of energy from Austin in the first 20 minutes after they were turned over at home.  We’re looking forward to Wednesday.  We got a good result last time against Austin, but we were a little lucky to push with 10 men and get two goals back, so we certainly want to control the game a little better right off the bat.”

Defender Matt Mahoney has proved an invaluable signing for the Switchbacks, with the former Temple Owl being used across the backline.  “Matt was one of the first people we called; anywhere I go I would bring Matt for his versatility and toughness,” said Head Coach Burke.  “He’s intelligent, he’s hard, he’s bought in and he’s willing to bounce around in order to stay on the field.  When we’re at full strength as a team – which I still don’t think we have been this year – we’re going to have great internal competition, and that will ultimately make us a sharper team.” 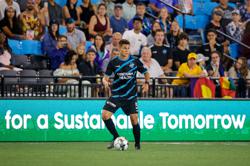 “Coach Burke and the team that he’s built is a big reason that I’m here with the Switchbacks,” said Mahoney.  “With the [Bethlehem] Steel I could see the type of person Brendan is off the field.  The trust is huge – but not just in me.  I think the staff trust the entire team, and with the stretch we have coming up that’s hugely important because we’re going to have to rotate with playing games every three days.  It’s nice for Coach to say those things, but it means a lot that he trusts the whole group and that everyone is contributing.”