For fans stuck in a galaxy far, far away and unable to attend Saturday’s match, the contest against Hartford Athletic will be broadcast live by the voice of the Switchbacks, Ryan Kaufman, on XTRA Sports 1300 AM and xtrasports1300.com.  Coverage will begin at 6:30pm MT.

The Force was not with the visitors on Wednesday night in the Lone Star State as Austin Bold defeated a much-changed Switchbacks team 2-1, despite a first professional goal for 16-year-old Darren Yapi.  “I thought the team did well last night and the guys who came in showed why they’re here,” said Switchbacks captain Jimmy Ockford.  “A lot of young guys came in who don’t have a lot of experience and they played against a solid team in Austin.  I thought for the most part we had control of the game – it was an unfortunate result for us, but I thought that everyone on our side did well for themselves.” 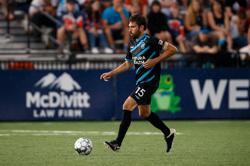 “We got to rest a couple of guys last night and with this huge stretch of games coming up the important thing is to be smart with our bodies,” continued Ockford on Thursday afternoon at Weidner Field.  Ockford confirmed his absence from the starting lineup against Austin was due to the run of five matches in just 14 days for the Switchbacks.   “I’ve played a lot of games so far this year, and Coach ran it by me and asked how I felt about taking a night off and making sure that I recover a little bit.  What we do off the field during this run of games is very important because we have to make sure we’re as fresh as possible for every game.  Right now we continue to take it one game at a time and just be smart. The guys who didn’t get many minutes in Austin got a nice session today, and for the guys who played a lot yesterday it’s all about recovery.  We have to get on top of Hartford early – we do our best when we start a game with energy right off the bat and do everything to get a goal early on.”

“Physically the squad came through last night perfectly, and obviously that was a concern and one of the reasons for the rotation,” said Switchbacks Assistant Coach Stephen Hogan.  “You have to take care of all the players because you never know when they’re going to be called up.  Coach trusts them, so he doesn’t mind putting out that XI that we saw last night.  He will do it again if he has to, with full confidence and trust.  We probably should have got away from Austin with a tie at least –  and we could have nicked a win – and it was just one or two errors that cost us.  Physically we’re fine, the rotation has helped, and we’ll have to keep an eye on it tomorrow.”

At the time of writing, Hartford Athletic sit in 4th place in the USL Championship’s Atlantic Division, with a record of 7-4-3.  A goal from Bradford Jamieson IV secured a 1-1 draw for Hartford Athletic against The Miami FC on Wednesday night, although the former LA Galaxy striker was brought off at halftime.  Colombian Danny Barrera, Cameroonian Preston Tabort Etaka, and Honduran Juan Carlos Obregón Jr. each have four goals in 2021 to top Hartford’s goal-scoring chart. 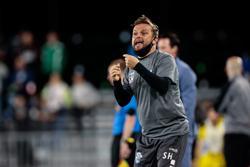 “The staff have known about Hartford for a while with our time in Philly; we know the type of players they have and the style of play they have,” said Assistant Coach Stephen Hogan.  “In terms of getting it right on a quick turnaround, I think that’s just up to our guys who show up on Saturday night.  There’s 48 hours to prepare and, excuse the language, but the guys are pretty pissed off about the other night because we went to Austin with a rotation and we probably should have gotten a result out of that – but the guys want to come back and get back on the winning way.  We have to come at Hartford strong and fast straight away.  You never know who is going to do what in altitude.  I think we’re all pretty fit and we’re angry from the other night, but I think if we can get back-to-front quickly and if we can get into certain spaces just inside their half, I think we could transition quite well against Hartford.  If we take care of the middle third it’s going to be a very open game for us.  But again; until the whistle blows you don’t know, so we just have to prepare the best way we can and hopefully it’s a big transition game for us and we put three or four goals in the net, which is expected most days now.”

A first-ever trip to Bluff City awaits the Switchbacks next Tuesday evening, with the match against Memphis 901 FC being broadcast live by the voice of the Switchbacks, Ryan Kaufman, on XTRA Sports 1300 AM and xtrasports1300.com.  Coverage will begin at 5:30pm MT.