On Saturday evening, the Switchbacks play their fifth game in just 14 days as they square off against the Rio Grande Valley FC Toros at H-E-B Park in Edinburg, Texas.  The match will be broadcast live by the voice of the Switchbacks, Ryan Kaufman, on XTRA Sports 1300 AM and xtrasports1300.com, with coverage beginning at 5:30pm MT.

The Switchbacks battled to a 1-1 draw with Memphis 901 FC on Tuesday night at AutoZone Park in the Bluff City, after going ahead through a 35th minute penalty kick from the USL Championship’s leading scorer Hadji Barry.  Memphis equalized via a PK of their own with just six minutes remaining in the match during a disjointed sequence that saw Switchbacks captain Jimmy Ockford sent off.  Ockford will not be available for Saturday’s match against RGV.

Tuesday’s tie in Memphis saw Beverly Makangila withdrawn in the 24th minute due to injury, with Switchbacks Head Coach Brendan Burke confirming the Congolese midfielder is set for a spell on the sidelines.  “He got t’d up from behind and the reality is that he may be out long-term,” said Burke on Wednesday afternoon.  Stephen Echevarria replaced the stricken Makangila, and slotted alongside the impressive Rony Argueta and Andre Lewis in the heart of the Switchbacks’ midfield. 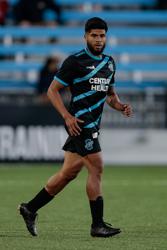 “It’s good to get some playing time and it’s good to have the confidence and trust from the coaching staff that the guys who are brought in can get the job done,” said Rony Argueta, before being asked about the injury to Makangila.  “That’s going to be a big loss, but hopefully he can get cleared soon and get back on the pitch.  He’s just so solid defensively and at recovering balls and we’re going to miss that, but we have depth and that’s what I’ve come to notice on this team.  We have depth and we’re going to stay together and we’ll be just fine.”

“We don’t rotate anyone in unless they’re deserving and I thought Rony played really well last night,” said Head Coach Burke.  “Dre [Andre Lewis] has been up there amongst our best players over the last couple games, so we know we have options.  José [Torres] has been rested once or twice now in this five-game period – he’s an option as well.  So we have plenty of options even though [Philip] Mayaka is still dealing with a little groin issue, but he may come around by the weekend.  And we have Yaya [Toure] too – there were a lot of guys that we didn’t bring to Memphis.  We’re doing everything we can on the sports science side to keep our top group prepared to play, but other guys are going to have to eat minutes.  You’ll definitely see guys – at least one – make their first start of the season this weekend.”

The Rio Grande Valley FC Toros fell 2-1 to high-flying San Antonio FC on Sunday night in Edinburg, Texas.  Venezuelan Juan Carlos Azócar scored the only goal of the match for the Toros and leads RGV with five goals in 2021.  Head Coach Wilmer Cabrera’s team is 5-3-1 at home this season at soccer-specific H-E-B Park. 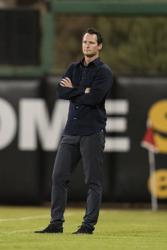 “Playing on a good surface helps us and RGV are a good ball-playing team,” said Switchbacks Head Coach Brendan Burke.  “In Memphis it just became about combativeness and set pieces on a cow pasture –  quite frankly the surface was horrendous.  So it will be really good to get back on a good surface this weekend.  RGV are very patient, they’re clever on the ball and they’re competent on the ball in every position.  They’re highly technical and they have some vastly experienced players, so they’re a lot to prepare for.  The best part for us is that they like to play and we like teams that want to play soccer.  I’m glad we’ve rotated as much as we have because it should leave us still standing when we come through this period.  The most important part was for us to stay in touching distance, which we’ve done a great job of.  We’ve won two, drawn one, and lost one in this spell of five games in 14 days, and if we can come out with any result this weekend at RGV then we know we’ll have done a phenomenal job of managing that period.”

“RGV are a team that’s good in possession and very good on the ball, but we’re going to keep focusing on ourselves and come out and compete on Saturday,” added Rony Argueta.  “We’ll press, try to win the ball back high up the field, and look quickly for our front three – who’ve been very good for us this season.  We’re not afraid of anyone, and we’ve already proven that we’re really good, so we’re just going to come out on Saturday and do our thing.”

The Switchbacks return to Weidner Field on August 28th to host Austin Bold FC.  Gates will open at 6pm on Bucket Hat Night, with the first 600 fans receiving a Pikes Peak National Bank bucket hat.  Tickets for the match against Austin are available HERE.