After eight goals in their last two games, the Switchbacks return to Weidner Field on Saturday as they host Austin Bold FC on Bucket Hat Night.  The first 500 fans in attendance will receive a bucket hat, courtesy of Pikes Peak National Bank, with gates opening at 6pm.  Tickets are available HERE.

For those unable to attend, the match will be broadcast live by the voice of the Switchbacks, Ryan Kaufman, on XTRA Sports 1300 AM and xtrasports1300.com, with coverage beginning at 6:30pm MT.

Michee Ngalina and Hadji Barry were both named to the USL Championship Team of the Week after their respective performances in the Switchbacks’ 3-3 draw against the Charlotte Independence last Saturday. 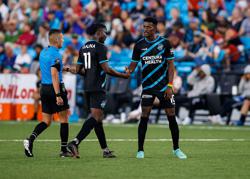 “It’s an absolute pleasure first of all,” said Zach Zandi when asked about playing with Ngalina and Barry.  “They’re both quality guys on the field, but I think it’s more important that they’re even better guys off the field.  They don’t let things get to their head, they’re team players, and that’s massive just for us as a team.  You’ve got a guy in Hadji that’s scored 19 goals in 19 games, which is absolutely ridiculous – it’s unheard of.  And Michee as well – he’s just on fire.  Those guys are an absolute pleasure to play with and they’re both top top quality.  I’m really happy to play with them because it makes me better and makes us better as a team.”

“Those guys were in a really tough place last year, so it means everything – to all three of us,” said Head Coach Brendan Burke after being asked about the national plaudits for Ngalina and Barry.  “To see the two of them at the top of their game is everything that I promised them when they came here and more.  And it’s all to their credit – they work their socks off, they’re always tuned in, they do everything they need to in order to take care of themselves to be available every night.  All of those boxes are checked and they’re getting rewarded for it.  You can only hope it continues because, honestly, it’s fantastic to watch.  I certainly think that both could play in most leagues in Europe and could most certainly play in MLS without any problem, depending on the city.  The sky is the limit for them.  Michee is a lot younger, but Hadji is still dead in his prime.  There is nothing stopping those guys from climbing the proverbial ladder – and more than a few rungs.” 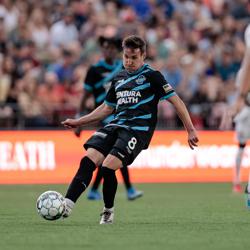 Another positive note from the 3-3 draw in Charlotte was the return of Zach Zandi to the Switchbacks’ lineup.  “I’m definitely working my way back,” said Zandi.  “My fitness is coming back, and I’m just here to help the team in any way possible and wherever that is.  If that’s off the bench, if that’s starting; wherever I can help the team is all I could ask for.”

“Obviously Zandi’s technical ability is right at the top of the group, if not at the top of the group,” said Head Coach Burke.  “We’re excited for him to be back in the mix and honestly Andre [Lewis] has done so well in the last couple weeks that it’s given us some lineup headaches – but on the good side, and not like the kind of headaches we were having early in the season.  Now we have competition in four or five places for starting spots, which is where you want to be at this point in the season.”

The Switchbacks and Austin Bold have already faced each other twice this season, with each team claiming a narrow one-goal victory.  The Switchbacks were victorious 3-2 in Texas on June 22nd, before Austin won 2-1 on August 4th at Bold Stadium. 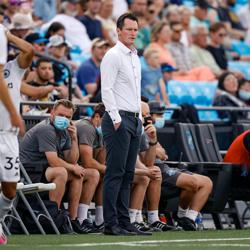 “We rotated pretty heavily the last time we played Austin so we didn’t have what I would say is the primary group out there from the start, but the guys that did play did well,” said Head Coach Burke.  “From a game-model standpoint we still got a very good read on what the game can and should be like against Austin, but obviously this time it’s at our place and at altitude.”

Austin Bold fought out a 1-1 draw with New Mexico United at Bold Stadium on Monday evening, with Beto Avila scoring the equalizing goal in the 55th minute.  The Switchbacks were under no official mandate from their Head Coach to watch Monday’s game in Texas, with Brendan Burke stating on Tuesday afternoon, “We’ve been grinding away on the road, so I left it open to the guys but I will say; the smart ones always watch it when there’s an opportunity.”

“On Saturday we just need to stick with what we’ve been good at, which is getting at teams in transition,” added Zandi.  “Austin are probably going to be trying to play a low-block and try to counter on us, so we may have to be patient at times and try to break down that block, but it’s the transition moments that we really live for and our attack lives for.  So we need to capitalize on those chances and finish the opportunities we create.  We’re a team that’s going to score goals, so if we can clean up the little things defensively then we’re going to win games.”

“We’re looking forward to being home and hoping the fans are out in big numbers,” said Head Coach Burke.  “We did great work on the road and we’re an exciting team to watch – we’re the highest scoring team in the country right now.  We’ll get after it for the fans and we hope they make it loud.”