Unbeaten in their last five matches, the Switchbacks head south to Albuquerque for a Saturday night showdown against New Mexico United at Isotopes Park.  The match will be broadcast live by the voice of the Switchbacks, Ryan Kaufman, on XTRA Sports 1300 AM and xtrasports1300.com, with coverage beginning at 7pm MT.

The Switchbacks are the highest scoring team in the USL Championship during 2021, and have recorded 17 goals in their last five matches.  Part of the recent offensive outburst has been a change in formation that sees the Switchbacks start just three defenders.  “I think it suits us well,” said defender Matt Mahoney when asked about the transition to a back three.  “We’re scoring three to five goals a game, so it allows us to get that extra attacker on the field, but it also leaves us susceptible to giving up a few.  When we’re scoring this many goals, then more often than not we’ll win.  I always preach that if we can get the job done defensively, then it will give our guys like Hadji [Barry], Michee [Ngalina], Becky [Deshane Beckford], [Thomas] Amang, and everyone else up there a good chance to go and finish off games for us.  The way we are with possession – and in transition – there aren’t many teams that are going to stop us if we can keep them to one goal a game.  Last game Abe [Rodriguez] came up with a few big saves, and if we can pull these out like we did, then we can win most games.”

Hadji Barry extended his lead atop the USL Championship’s goal-scoring charts after lodging his 20th goal of the season in the Switchbacks’ 4-1 win against the Austin Bold on Saturday evening at Weidner Field.  “Hadji’s record speaks for itself,” said Mahoney.  “Twenty goals in 20 games is unheard of – I’ve never seen anything like it.  And Michee as well!  His goal last game was something I’d never even think of, as a defender, to chip it over the keeper.  Thomas has come in and is gelling well and Becky has been going all season – the threat we have is a lot different than a lot of teams in the league with the technical ability and speed and athleticism of our guys up top.  It’s amazing to watch and amazing to play with them every day.” 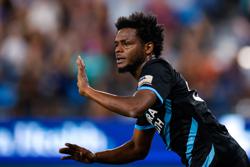 Thomas Amang, Hadji Barry, and Michee Ngalina were joined on the scoresheet last Saturday against Austin Bold by Triston Hodge.  The Trinidad and Tobago international pounced on a loose ball in the 38th minute from a corner kick before rocketing in a strike to open his account with the Switchbacks.  Hodge was named to the USL Championship Team of the Week after his performance last Saturday.

“I’m so happy for Triston – and I think it takes some of the pressure off the front guys to score goals,” said Matt Mahoney.  “You don’t have to rely on the attackers so much if a defender can get a goal here or there, and it just proves and shows the competitive edge that we have.  That was off a corner kick, the ball was just bouncing around, and Triston just fired it home.  I’m sure he’s ecstatic and I’m happy for him as well – it’s amazing to see how the team is gelling and that everyone is contributing.”

Saturday’s match will round out the regular season series between the Switchbacks and New Mexico United, with the hosts having won two out of the three games.  The Switchbacks were victorious 3-1 at Weidner Field on June 25th behind a brace from Hadji Barry after Deshane Beckford had opened the scoring just before the hour mark.  In the most recent meeting between Saturday’s opponents, New Mexico scored twice in stoppage time through Michael Azira in the 91st minute and Ilija Ilić in the 93rd minute to win a combative contest 3-1 at Isotopes Park on July 9th. 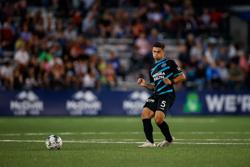 “We owe New Mexico,” said Mahoney.  “They’ve beaten us now two times, and we got one on them as well, but there’s a sour taste from last time at their place where it was 1-1 late in the game and we ended up losing 3-1.  We need to get on top of the game early and if we can play the way that we know we can – and not concede goals – we’ll get chances to come away with a win.  The first 15 minutes is key for us; that’s the one weakness we’ve had this season.”

The Switchbacks will return to Weidner Field for a three game homestand starting on September 8th.  Gates open at 6pm next Wednesday as the Real Monarchs SLC visit Colorado Springs for Margaritaville, where $3 margaritas will be available all evening for those 21+.  Just three days later, the Rio Grande Valley FC Toros travel to Weidner Field on Superhero Night, presented by Children’s Hospital Colorado, Colorado Springs.  A post-match fireworks show will follow the contest against the El Paso Locomotive on September 15th.  Tickets for all three matches are available HERE.