On Saturday evening the Switchbacks look to win their fourth straight match at Weidner Field as they host the Rio Grande Valley FC Toros on Superhero Night.   The first 1,000 fans through the gates at 6pm will receive a pennant, courtesy of Children’s Hospital Colorado, Colorado Springs.  Tickets for Saturday’s match are available HERE.

For those unable to attend, the match against RGV FC will be broadcast live by the voice of the Switchbacks, Ryan Kaufman, on XTRA Sports 1300 AM and xtrasports1300.com, with coverage beginning at 6:30pm MT.

Wednesday night saw the Switchbacks record their first shutout in the history of Weidner Field in downtown Colorado Springs as they blanked the Real Monarchs SLC 2-0.  Just before the hour mark, Hadji Barry extended his lead atop the league’s scoring charts with his 21st goal of the season.  Barry was named the USL Championship Player of the Month after scoring six times in August.  “Right now he can’t be stopped,” said Switchbacks Head Coach Brendan Burke.  “It’s deserved and I think he’s making his case for Player of the Year with the way he’s carried us on the attacking front.”

José Torres opened his account for the Switchbacks in the 65th minute against the Real Monarchs with a sensational volley that’s destined to be a highlight reel favorite for years to come.  “José hit that about as well as you can hit a ball,” said Head Coach Burke.  “He definitely showed his class [against the Real Monarchs] and not just with that goal but in how he controlled the game.  I thought he was excellent for us from start to finish.” 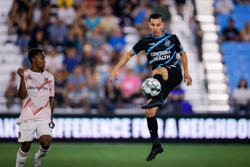 Torres’ sensational goal is a shoo-in for USL Championship Goal of the Week, with Torres saying on Thursday that the strike reminded him of a goal he scored while playing in Mexico’s Liga MX.  “I was telling Zach Zandi after the game that at Tigres I had a similar one but that was closer to the left side of the box, almost without an angle, and the ball wasn’t that high…so it was pretty tough [against the Monarchs] because the ball was pretty high as it was coming to me.  I knew that I had to finish it and that’s what I did – I had nothing to lose.  If I hit it wrong it was just going to go over the goal and into the stands, and I thank God for putting me in that spot and me being able to finish it.  It felt so good being able to score and being able to do that at home in front of our fans, and with the [back flips] celebration I just wanted to show the fans that a 33-year-old still has that in him!” 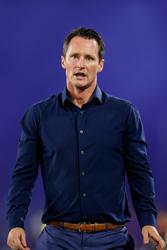 The Rio Grande Valley FC Toros are winless in their last six matches, which includes a 5-2 loss to the Switchbacks on August 14th at H-E-B Park in Edinburg, Texas.  “They’ve not been in great form, so they’ll bring some desperation,” said Head Coach Burke.  “They’re a good team and they showed that at the start of the year.  We know they’re very experienced in almost every position, they’re clean on the ball and they like to have the ball, so I do expect it to be a really high-end game in terms of the technical side.  Elvis Amoh is quietly one of the best forwards in the league, so we’ll have our hands full.”

Ghanaian striker Amoh leads the Toros in goals with eight, while Venezuelan Juan Carlos Azócar has scored six times this season, including the opener in the aforementioned match against the Switchbacks on August 14th.

“RGV have a great team and they have experienced players too,” said José Torres.  “Obviously we have to worry about them, but we also have to focus on ourselves and how we defend, and make sure we don’t concede goals.  And we need to make sure we put away the chances that we have – we have the talent, the quality, we have great players, and I think we’ll do well this weekend.”

With a stretch of five matches in just 15 days, Head Coach Brendan Burke confirmed that changes to the lineup are in the works for Saturday’s match against RGV FC.  “We’re having conversations about rotating in certain areas and there will definitely be at least two or three spots where we see different starters on Saturday because we have to turn around again to Wednesday,” said Burke.

Next Wednesday, the Switchbacks will conclude their homestand by hosting Mountain Division leaders El Paso Locomotive FC.  Fireworks will follow the match and tickets are available HERE.