It’s Free Underwear Night at Weidner Field as the Switchbacks host El Paso Locomotive this Saturday.  When gates open at 5pm, the first 1,000 fans will receive a pair of underwear, courtesy of Sheath.  Tickets for Saturday’s match are available HERE.

For those unable to attend, the match against El Paso Locomotive will be broadcast live by the voice of the Switchbacks, Ryan Kaufman, on XTRA Sports 1300 AM and xtrasports1300.com, with coverage beginning at 5:30pm MT. 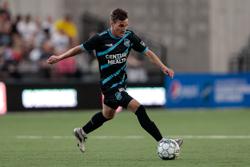 The Switchbacks are unbeaten in their last five matches, which included a 0-0 draw with El Paso Locomotive on September 15th at Weidner Field in downtown Colorado Springs.  “When you have two good teams, tactically it’s going to be a bit of a battle,” said Switchbacks midfielder Zach Zandi.  “Both teams have pretty different styles of play.  El Paso are more of a possession-based team, and we like to counter attack.  El Paso try to minimize us countering against them by possessing and sitting back, so I think that game [on September 15th] was just two really good teams that cancelled each other out.  But I think the games against them have been good and entertaining and very high quality.  When you play against a team that’s as good as El Paso, it’s hard to break them down, so it’s normally a pretty cagey affair.”

Entering Saturday’s match, El Paso top the USL Championship’s Mountain Division, with the Switchbacks in second place.  The Locomotive are 14-2-8, and have tied the Switchbacks both times the teams have met this season; a 1-1 draw at Southwest University Park in Far West Texas on June 12th, and the aforementioned 0-0 stalemate at Weidner Field on September 15th.

“El Paso are definitely the best team we’ve seen this year,” said Zach Zandi.  “They’re clearly the best that we’ve played in the Western Conference.  On Saturday we have to be creative in the final third and try to unlock them as best as possible and find different solutions.  We’re a goal-scoring team and it’s five games unbeaten for us, so we’re on a good string of form too.  Continuing that momentum –  especially the momentum that we have at home –  is really important.  Those were two massive victories for us against RGV and Austin and it’s huge for us to be able to carry that momentum into the El Paso game on Saturday.” 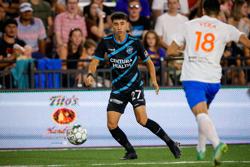 Switchbacks defender Sebastian Anderson was named to the USL Championship Team of the Week after a Man of the Match performance that included two assists in the win against the Austin Bold last Saturday at Weidner Field.  “Seb is an incredible player,” said Zach Zandi.  “He’s been really good for us, and we talk a lot about our attacks on that right-hand side, and that’s credit to him.  His deliveries on the ball are spectacular and we saw that perfectly displayed with his cross to Deshane [Beckford].  His delivery of the ball is on-point and it’s just up to the other guys to get into the right positions because you know Seb will put something in with expertise and serious quality.  He’s a great asset to have, and he’s a great guy off the field as well.”

Following the 3-1 win against the Austin Bold on September 25th, the Switchbacks had a rare week to recover and game plan for the visit of El Paso on Saturday evening.  Meanwhile, the Locomotive defeated the Real Monarchs SLC on Wednesday evening at Southwest University Park behind a 68th-minute own goal from Monarchs midfielder Ibrahim Bancé.

“I think it’s massive, honestly, to have this time to prepare,” said Zandi on Thursday morning.  “[Head Coach] Brendan [Burke] has talked about it a lot, with these last two weeks being the first time in a while that we’ve had a full week to prepare for games.  It helps us a lot when we don’t have the midweek games and you’re not focused on anything else and the team is singularly focused on the game at the weekend so that all our energy goes into that.  There’s a lot more preparation that can happen for us before Saturday, so I think just being home for this week is massive and hopefully we can show how much it’s helped this weekend against El Paso.”

Next Friday, October 8th, the Switchbacks face the Real Monarchs SLC at Zions Bank Stadium in Herriman, Utah.  On Wednesday, October 13th the Switchbacks will head to The Sun City to face the Locomotive at Southwest University Park.  Just three days later, the Switchbacks play their final regular season home match of 2021 at Weidner Field as they take on the Rio Grande Valley FC Toros on Saturday, October 16th.  The match against RGV is Soccer Ball Night, with the first 1,000 fans receiving a soccer ball, courtesy of Comcast Business.  Tickets for the regular season finale at Weidner Field are available HERE.