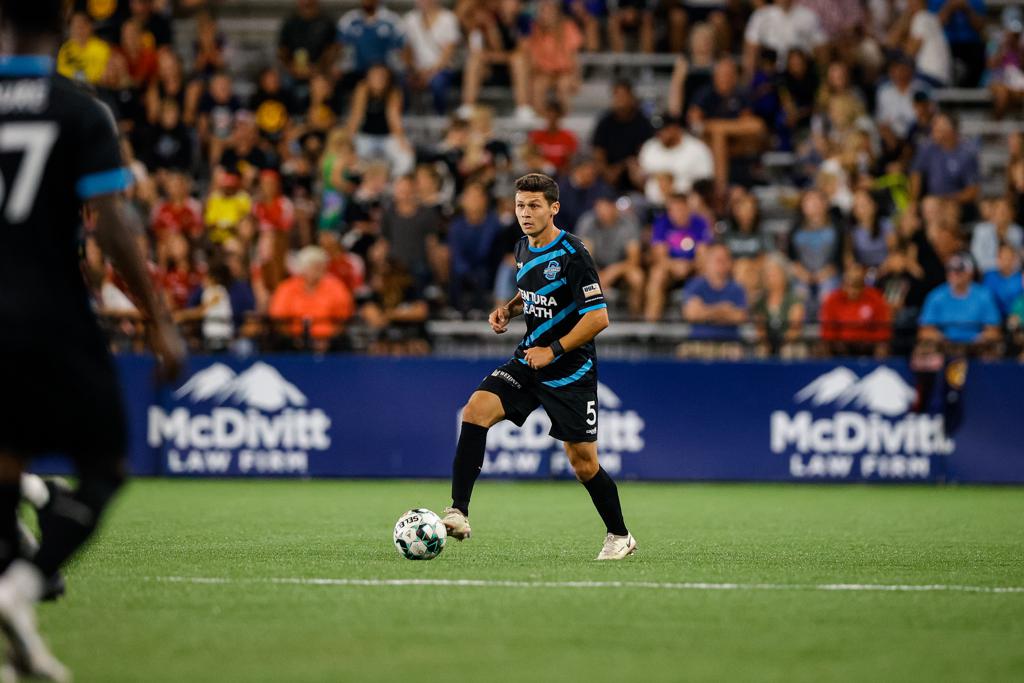 Just four games remain for the Switchbacks in the 2021 USL Championship regular season as they head to Far West Texas for a Wednesday night clash with El Paso Locomotive at Southwest University Park.  Mountain Division leaders El Paso are unbeaten in eight matches, which includes two draws with the Switchbacks at Weidner Field in downtown Colorado Springs: 0-0 on September 15th and 1-1 on October 2nd.

Wednesday’s match against the Locomotive will be broadcast live by the voice of the Switchbacks, Ryan Kaufman, on XTRA Sports 1300 AM and xtrasports1300.com, with coverage beginning at 6:30pm MT.

On Friday night, the Switchbacks tied the Real Monarchs SLC 0-0 at Zions Bank Stadium in Herriman, Utah.  “Personally that felt like a couple points lost,” said defender Matt Mahoney when asked about Friday’s match.  “We know they had a couple MLS guys coming down, but I think with the squad we have and the kind of power we’ve had all season going forward – and the playoff race that we’re in – we were kind of hoping that we’d go there and get three points.  But at the end of the day, you try to find the positives as well.  Clean sheets were hard to come by for the first part of the season and now we’ve only given up four goals total in the last seven [games] so we have to think of the positives on the defensive side.  And we know what we can bring on the attacking side, so we just have to get back to that and what we’re good at.  Friday was two points lost, but now we have to turn the corner and look at El Paso.”

In this season’s previous matchup in El Paso, the Switchbacks tied the Locomotive 1-1 on June 12th at Southwest University Park behind a 73rd minute equalizer from the USL Championship’s leading goal-scorer Hadji Barry.

“I think against El Paso it comes down to us keeping a clean sheet, and then trying to strike first and fast,” said Matt Mahoney.  “We know that our conference is the toughest of the four [USL Conferences] this year.  El Paso have a ten-point lead on us – with a game in hand – but they’re banged up a little bit, just like everyone in this league.  If we can go down there and bring the energy and play like we know we can, we know that we should be able to get something out of the game.”

The Locomotive took a two-goal lead on Saturday night at ONEOK Field against Tulsa FC, eventually winning the match 2-1.  Luis Solignac’s 14th minute goal gave the Argentine striker the lead atop the Locomotive’s scoring charts with eight goals.  Aaron Gómez, who put El Paso ahead against Tulsa FC, has found the net seven times in 2021.  Attacking midfielder Diego Luna has also scored seven times this season and has been one of the most impressive young players in the USL Championship.

A November playoff matchup could well be in store for the Switchbacks and Locomotive, and while El Paso have already secured a place in the 2021 USL Championship Playoffs, Mahoney says the Switchbacks are not looking that far ahead.  “We go game-by-game, so even though we only have four games left and playoffs are around the corner, we can really only focus on what we can control in the moment,” said Mahoney.  “Our focus now is on Wednesday in El Paso and then it’ll be on RGV on Saturday, and so on.  The goal for us right now is securing that second-place spot, and then we’ll go from there.”

“The thing is that we’ve now played a lot of these [Mountain Division] teams three times so we know what we’re going to get from El Paso,” continued Mahoney.  “With these short weeks it’s more about making sure we’re rested, fresh to go, and can bring the energy.  The quality will have to come out.  We know what we have to do to go down there and beat them, so if we play like we know we can, then we should be able to get a result.”

On Saturday, October 16th the Switchbacks play their final regular season home game of 2021 at Weidner Field in downtown Colorado Springs as they host the Rio Grande Valley FC Toros on Soccer Ball Night.  The first 1,000 fans through the gates at 5pm will receive a complimentary soccer ball, courtesy of Comcast Business.  Tickets are available HERE.