Already guaranteed a place in the 2021 USL Championship Playoffs, the Switchbacks head to San Antonio knowing a win on Saturday night secures a home playoff match at Weidner Field in downtown Colorado Springs.  A tie or a loss to San Antonio FC would see the Switchbacks finish in third place in the Mountain Division, while the win would clinch second place, and with it a home match to begin the postseason, with tickets available HERE.

The voice of the Switchbacks, Ryan Kaufman, will broadcast Saturday’s match in the Lone Star State on XTRA Sports 1300 AM and xtrasports1300.com, with coverage beginning at 6pm MT. 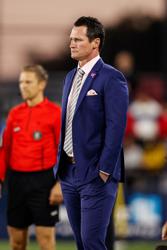 The Switchbacks tied 1-1 with the Real Monarchs SLC last Friday night in Herriman, Utah through a 95th-minute equalizer from Andre Lewis.  The Monarchs were down to 10 men for the majority of the match on Friday, after Julio Benitez was shown a straight red card in the 13th minute.  “We were poor [in Utah] – there’s just no way around that,” said Switchbacks Head Coach Brendan Burke on Tuesday.  “We didn’t have the right intensity level from the start of the game on either side of the ball.  We didn’t play poorly technically or tactically, but our intensity level was low all night.  We allowed 10 men to stay in the game – which you see a lot and happens all the time – but it shouldn’t be happening to us with our style of play and the players we have on the field.  We were very disappointed with a point, but we recognize that we kept pushing until the final whistle, and that point meant that San Antonio couldn’t get away from us.” 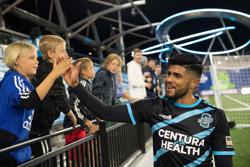 “San Antonio are a very direct team and we know it will be a good battle,” said Switchbacks veteran Rony Argueta.  “If we stick to what we’ve been doing, stick to our style of play, and stick to the ideas and the philosophies that coach has instilled in us, we’ll be ok.  We’re hungry for that home playoff spot.  It would be big to have the home playoff game, with the entire stadium behind us.  With the fresh energy coming into this season because of the new stadium, we’ve seen the support just growing and that’s because of the good product on the field – everybody wants to see a winning team and an exciting style of playing football.  Saturday is going to come down to who wants it more and the energy and the willingness to go 90 minutes plus to get the result.”

San Antonio lead the entire USL Championship in yellow cards with 89, and have been booked nine times against the Switchbacks in 2021.  “San Antonio are just viciously combative,” said Head Coach Burke.  “You would have thought the league would have gotten ahold of them by now, but they’re big, they’re physical, they play for set pieces – it’s a messy style of play, but they are what they are and they have an identity, they’re good at it, and they deserve credit for being good at what they do.  We need to put on a performance that’s far better than the one we put on the first time we were down there in the first game of the season.  Saturday has been circled for us since that game [on May 1st].”

“Saturday is a playoff game,” continued Burke.  “At the very least it’s a great dress-rehearsal for the playoffs.  We know we’re going to see OC [Orange County SC] or San Diego [Loyal] – probably OC – but the reality is that we’re going down to San Antonio with a free-swing in a playoff environment, which is more than we could ask for at the start of the season.”