On Saturday night, the Switchbacks begin their 2021 USL Championship Playoff campaign with a Conference Quarterfinal matchup against Orange County SC at Championship Soccer Stadium in Irvine, California.  Saturday’s match in SoCal will be broadcast live by the voice of the Switchbacks, Ryan Kaufman, on XTRA Sports 1300 AM and xtrasports1300.com, with coverage beginning at 7:30pm MT.  The Trailheads Supporters Group will be hosting a watch party at Jack Quinn’s Irish Pub and Restaurant in downtown Colorado Springs.

The Switchbacks and Orange County SC have faced off twice in 2021, with a preseason match at Weidner Field ending 2-2 on April 24th after a brace from the USL Championship’s Golden Boot winner Hadji Barry.  During the regular season, OCSC were victorious 2-0 in Colorado Springs on July 1st, behind goals from Finnish striker Eero Markkanen and SoCal native Eric Calvillo. 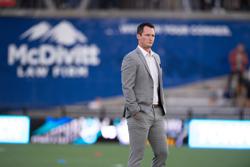 “We’ve been hit on the counter a number of times this year, so the pace of OC is a concern for us more so than anything else,” said Switchbacks Head Coach Brendan Burke.  “Markkanen hurt us with his size last time he was here, and the reality is that they [OC] have a lot they can throw at you.  They’re a very, very big-budget franchise – it’s a very different look for us in terms of the quality of players they can bring from anywhere in their squad.  For the most part, everyone [on OC] is experienced and has played at a really high level.”

“OC are a different looking team from when we faced them before,” said Switchbacks defender Matt Mahoney.   “Ronaldo [Damus] is a very quick player up top but OC can also be big and strong and combative.  We know what Saturday is going to be.  These playoff games are going to be a dogfight, so no matter what lineup they throw at us, we know what we’re going to have to do defensively to keep them off the scoresheet, and we know that we have the power going forward to get a goal.”

Orange County SC have compiled a home record of 7-5-4 in 2021, and have won five consecutive matches.  OCSC goalkeeper Patrick Rakovsky was named to the USL Championship Team of the Week after recording a clean sheet in a 1-0 victory over the Los Angeles Galaxy II on Saturday evening in Carson, California.  Haitian striker Ronaldo Damus leads OCSC’s scoring-charts with 14. 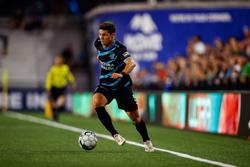 “It’s kind of exciting for us to go to a new atmosphere in Orange County,” said Matt Mahoney.  “We know it’s going to be nice weather in California and it’ll be kind of refreshing to see new faces and play a team that we haven’t seen in a while.  I’m sure the coaches are excited to prep for a new team and the whole feel for us is excitement at getting into the playoffs.  This club and organization haven’t had a lot of success in the last few years and we’re looking to re-set that and set a new precedent and level for this club.”

Last Saturday night the Switchbacks lost in San Antonio, but qualified for the playoffs as the 3rd-seed in the Mountain Division after going 13-9-10 this season.  “We have to forget what’s happened the past couple weeks in terms of the strength of our performances and obviously the result at the weekend,” added Matt Mahoney.  “We need a good hard week of training to get going – that will set the tone for the weekend.  If we have a good sharp week of training, we’ll go into the game feeling confident.  At the end of the day, it’s now four games to win a championship.  It’s win or go home, and we know that we can beat anybody in the league.  We have to go to OC, but that’s ok; we know we’re a good team on the road, no matter where we’re playing, and we’re going to go there, give our all, and hopefully get a win.”

“It’s refreshing to not be playing El Paso or San Antonio or New Mexico or Austin or RGV – that’s 16 to 20 of our games [this season] right there, which is kind of ridiculous,” said Head Coach Burke.  “It’s great to have fresh faces to look at.  We’re going to be missing a few guys this weekend and we were missing a whole handful last weekend.  Even some of the guys we had on the bench were hurting in San Antonio so we couldn’t use them, so we’re limping in a little bit.  We have a process and we need to stick to it – nothing changes for us this week.  Everything will be a normal week of preparation.  I think everyone in our locker room understands that we’re not happy to be here [on the road for the Conference Quarterfinals] – we still have a lot of work to do and there’s a lot of potential in the group if we get it right.”

The winner of Saturday’s match will face either El Paso Locomotive or the Oakland Roots in the Conference Semifinals next week.